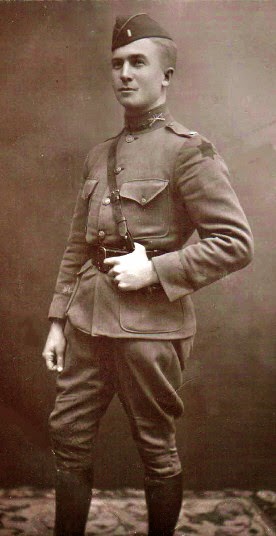 Edmund J. "Tad" Lilly was born in North Carolina and graduated from the University of North Carolina at Chapel Hill in 1915. In 1917, he received a commission in the regular army and was subsequently assigned to the 17th Machine Gun Battalion of the 6th Division of the AEF. With the 6th Division he spent 43 days in the line, mostly in the Vosges Mountains, and was deploying in the Argonne sector when the Armistice came. His battalion commander was Major James Van Fleet, who would become one of the most respected generals in American history. Lilly became an expert on the Browning M1917 and swore to his dying day (1978) that he believed he could still assemble/ disassemble one blindfolded. He decided to stay in the Army and make it his career after the Armistice.

In 1941 he was sent to Manila in the Philippines to serve in the U.S. Army's Philippine Division. He became the commander of the 57th Philippine Scout Regiment. The unit served on Bataan during the Japanese invasion. He became a POW in April 1942 when the Americans surrendered to the Japanese. For the next 40 months he was in various Japanese POW camps, surviving the Bataan Death March and internment in various camps throughout Asia, Formosa (Taiwan), and China. To keep his sanity, he maintained a diary in tiny notebooks. In addition to the diary he wrote down poems, songs, recipes, rules for Bridge and everything he could remember. He was liberated in Mukden, China, in September, 1945. After his release from the camp, he spent six months in hospital and eventually returned to active duty. He retired as a Colonel (Infantry) in 1954 (Ft. Sam Houston) and passed away in November 1978, in Fayetteville, NC.