Do You Ever Find Yourself in a Funk?

Do you have those sorts of days when you just have to get away from the turmoil of the social whirl? Of course you do.  But, suppose you found yourself in a trench crowded in, shoulder-to-shoulder with your fellow soldiers for days, maybe weeks, at a time.  How do you escape?

Well, you would find yourself a little storage niche in the parapet like the Tommy below to grab a snooze and psychologically withdraw for a bit. The troops initially called these "funk holes" after an old British/Scottish slang term for shrinking away or cowering in fear. But after several tours in the trenches everyone found they needed an occasional visit to a funk hole. The connotation of "funk" shifted more in the direction of a mild depressive state rather than of a fearful frame of mind. That's why, today, when you're in similar need to get away, you're said to be in a funk, and no one gets too excited about it. 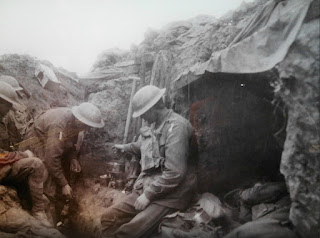 Image from the new war museum at Souchez, France