On 4 November 1918, the New Zealand Division liberated Le Quesnoy, a town of some 3000 people in northeast France. It had endured four hard years of occupation since the German advance in August 1914. 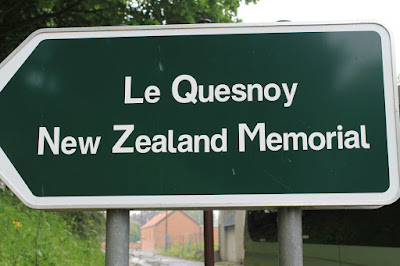 In August 1918 Allied armies broke through the heavily defended German Hindenburg Line and began advancing east and northward. By early November the New Zealand Division was outside Le Quesnoy. The next phase would involve the town although it was not the primary objective. The assault intended to take the Allied lines to the north and west beyond Le Quesnoy toward the Mormal Forest. Three divisions were involved, the British 37th and 62nd, along with the New Zealanders. The aim of the operation was to invest the town and prevent its influencing the advance toward the River Sambre, along with the capture or destruction of the German divisional artillery which was located beyond Le Quesnoy.

Le Quesnoy was one of Vauban's best examples, with a maze of ramparts, high walls, causeways,  and tunnels surrounded by moats. While considered outmoded by the 19th century, they would prove to be an effective defence with the weapons available to the Germans in 1918. The town was taken by German forces in August 1914.

Troops were in place soon after dark on the night of 3 November. At 5:30 a.m., the guns opened fire and the New Zealand Division raced forward. The creeping barrage machine guns maintained intense fire throughout the first phase, in spite of the heavy shelling that came.

The 3rd (New Zealand) Rifle Brigade had to clear positions forward of the town, and this indicated that the Germans were prepared to fight and hold. The New Zealand Machine Gun Battalion supported with covering fire coordinated in consultation with the infantry brigadiers. The Auckland and Otago Companies, with two sections of the Canterbury Company, provided the covering fire for the first phase. The Otago and Auckland Companies put down barrages along the southern and northern outskirts of the town.

By mid-morning the town was completely enveloped. Several attempts to induce the German garrison to surrender had failed and the Rifle Brigade began attempts to penetrate the defences. Covered by mortar and machine gun fire, and shrouded by mist and smoke projected forward by the Royal Engineers, the New Zealanders moved forward under fire from machine guns and snipers, toward  the outer ramparts. Lieutenant Francis Evans of the 4th Battalion, leading a patrol, reached the outer ramparts before being killed.

At around 4 p.m., Lieutenant H W Kerr led a patrol to a location on the walls where a narrow bridge was located. It was about the only place where scaling ladders could reach the crest of the defences. He took with him the battalion’s intelligence officer, 2nd Lieutenant L C L Averill MC, who had already spent much of the morning reconnoitering the defences.

Supported by mortars and covering fire from Lewis machine guns, they reached the bridge and erected the ladder. It was steadied by two riflemen and Averill was first up. The division’s Official History recorded the moment:

“ … Averill quickly reached the top of the brick work and stepped over the coping  onto the grassy bank. Crouching behind it, he peered over. It was one of the most  dramatic moments in the Division’s history. There was an instant crashing through  some brushwood on the far side and Averill saw two Germans of the bombing post  rushing away.

“… He sent a revolver bullet after them. Kerr was now on the topmost rung. The two  officers could see a pair of machine guns on the salient on their right, pointing into the  moat but abandoned.  They stood up and walked over the top of the grass slope and  down the other side towards the boulevard. They were greeted by a great jabbering of  German. Kerr fired a shot at the man who appeared to be leader, but missed. The  whole  enemy party bolted into an underground cavern under the rampart.

“…By this time the remainder of the battalion were swarming up the ladder. They were led by Barraclough himself who took with him a signaller and apparatus in order to open communications with brigade headquarters and establish the 4th Battalion’s claim to the  honour of the town’s capture. “

Several hundred prisoners were taken, along with quantities of guns of all calibres. Only the break into the town triggered a mass surrender by the defenders, and shortly afterward the 2nd Battalion marched in through the Valenciennes Gate. They were greeted by cheering townspeople who appeared from behind closed doorways as soon as they saw the New Zealanders.

For the New Zealand Division, the action was the climax of a bitter campaign that began when it arrived in France in May 1916.  Although hard fighting took place in the following days until the Armistice on 11 November, nothing would supplant the action that day. Next day the French President, Raymond Poincaré paid an official visit with the New Zealanders providing a guard of honour at the Place d’Armes and on 14 November, there was an exchange of flags between the town and the division.

The French sculptor Félix Desruelles prepared the New Zealand Memorial, which was unveiled at a ceremony on 15 July 1923 attended by Marshal Joseph Joffre, Lord Alfred Milner (who had served in the wartime British Cabinet), the New Zealand High Commissioner in London, Sir James Allen, and Lieutenant Averill.