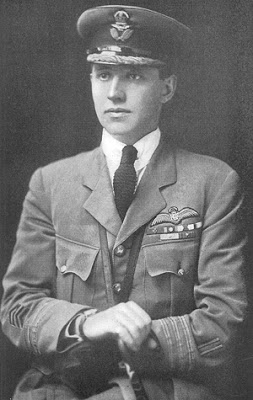 Whatever changed a Manitoba farm boy into one of the most decorated Canadian soldiers in two world wars?

During his early years in Dauphin and Russell, Barker showed an aptitude for machinery and marksmanship but little ambition for education. Once war was declared he enlisted. The army trained Barker as a machine gunner, and sent his Canadian regiment to fight in the Flanders trenches. Within a year, Barker had obtained a transfer into the Royal Flying Corps (RFC) as a gunner-observer. Before he turned 22, Will Barker had exchanged the life of a lowly Canadian trooper for that of British officer. Flying had become his vocation.

By 1918, Barker had been transformed into one of the best known soldiers in the allied forces. He received pilot's training after masterly service as a gunner-observer on reconnaissance flights over the German trenches (France, 1916). His airmanship was obvious when he began flying sorties, even in reconnaissance activity which relied upon teamwork.

Quickly promoted to Captain (May 1917), Barker began to exhibit the same careful leadership that would win him the respect of pilots he led for the rest of the war. Not one pilot died while flying under Barker's command. No aircraft in his escort was ever shot down. Barker ensured his flights (and later his squadrons) were ready for danger. In later years, the same qualities made him insist that the newly created Royal Canadian Air Force (RCAF) equip its airmen with parachutes.


Despite recognition, Barker wanted to be a "scout" and fly solo. When he was sent to England as an instructor in August 1917, he buzzed Piccadilly Circus and RFC headquarters until he was assigned to a scout squadron. Scouts were the romantic "knights of the skies" whose duels were avidly recorded in the press. Their reputations were won by the number of enemy aircraft they shot down, and Barker was among the best. His tally of 50 was earned in the same Sopwith Camel plane in the remaining wartime. Immediately given command, he is the only RFC scout never to have flown under another's instructions.

Assignment to the Italian Front in October 1917 provided Baker the opportunity to establish his reputation as a scout. He was soon promoted to major, flying missions constantly both with his men and solo. When forced to rest, he angled an observation trip to the Western Front, determined to increase his combat tally. There, he barely survived attack by a large force of German fighters. Barker shot down three planes, but he lay in a hospital bed until war was over.

William Barker died when a combat injury caused him to lose control of his test plane in 1930. His wartime record still stands in a blaze of glory. He was decorated both for exceptional devotion to duty and for extraordinary valor. He holds eight high honors, including the most distinguished military medals accorded by three countries: France, Italy, and Great Britain.