The Case of the Missing War Memorial

It was truly embarrassing.  Last month, on the first day of my second centennial battlefield tour, I took the group to the famous Plateau de Californie above the village of Craonne on the Chemin des Dames. Besides the amazing view of the battlefield one of the "must-see" sites on the plateau was the somewhat controversial but memorable bronze sculpture pictured below. [Note the use of past tense.] It stood 4 meters tall and weighed 1.6 tons. Artist Haïm Kern named his creation Ils n’ont pas choisi leur sépulture — "They didn’t choose their burial." It's considered something of a gem of anti-war artistic expression and I gave it a big build-up as we approached the plateau.

However, when we arrived at the site, the memorial was not where I had remembered. While I went stomping around the site grumbling about its being moved, the more sensible tour members discovered a sign indicating it had been stolen a year before. Needless to say, this did not put my trip preparation in the best light. However, things recovered pretty much for the rest of the tour, but I decided to investigate the theft when I returned home. 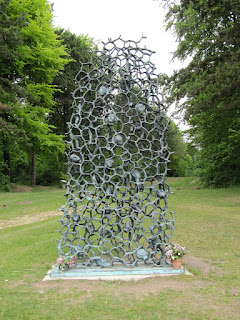 Here's what I've learned from various websites. Two arrests had been made of a metal scavenger, who had no idea of the symbolism represented by the sculpture, and of his fence. The statue had already been cut up, with 280 kg of the bronze found in a junkyard and the rest apparently already disposed of. The 84-year-old artist is reported to be deeply saddened by the theft and destruction of his work.