War Is the National Industry of Prussia 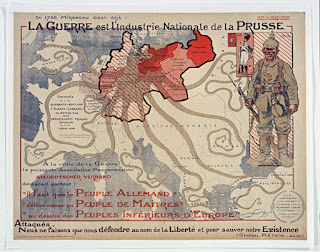 This map is an example of French anti-German propaganda published in 1917 when the war was going badly after the failed Nivelle Offensive. It was meant to justify a lingering war that claimed many lives. It denounces the ambitions of the enemy, pointing out the historical power of Prussia over German land since the early 18th century. The reference in the top left-hand corner to Mirabeau, an 18th-century French revolutionary, writer and diplomat, introduces this historical aspect. Mentioning the declarations of a pan-Germanist association gives a contemporary twist to the Prussian threat. The purpose of this map was to give the impression on the French side that this war was a fight for freedom against Prussian ambitions, that it would liberate the French territories "seized" by the treaty of 1871, which gave Alsace-Moselle to the Germans. The image of the octopus, popular at the time in this kind of document, suggests a threatening power that spreads its tentacles all over Europe.