Back in the bad old days, life in the army could get, well, downright lousy. An estimated 90 percent of the frontline troops in Word War I suffered from lice infestation—more commonly known as "cooties." 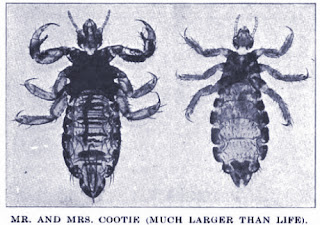 Without proper field sanitation, lice spread quickly from one soldier to another. Hence, it took very little time for the uninitiated to begin slapping, scratching, and nitpicking along with the rest. Alas, it seemed the only alternative was to simply learn to coexist with, as one wag put it, "our little brothers in the trenches."

Lice (called "Greybacks" in the Civil War) were also referred to as "Arithmetic Bugs" on the Western Front. Why? Because as anyone who ever experienced them could attest, they added to your misery, subtracted from your pleasure, divided your attention, and—worst of all—multiplied like the dickens! Edgar B. Jackson, a veteran of the Great War, vividly recalled doing battle with the little bugs. "For several days," he noted in his wartime journal, "I had been tortured by a desire to scratch—and to keep on scratching. Reluctantly I came to the conclusion that a legion of uncommonly active anthropoids, members of the order of Pediculus corpus or of Cimex lectuladus, were gallivanting over my anatomy with an attitude of proprietorship and carefree abandon."

Fortunately for the trench-bound Allies, the Quartermaster Laundry Branch came to the rescue. By war's end, mobile laundry units (horse drawn and steam driven) moved closer and closer to the front. Such apparatus operating near the front had to be carefully camouflaged, as either smoke or steam led the enemy to believe they had discovered artillery batteries.

The delousing plants set up at Le Mans and other base ports were so elaborate that Doughboys termed them "mills." Entering "The Mill" dirty, weary, and disheveled, the soldier on his exit came out completely renovated both in clothing and body. So successful were these operations that within six weeks the incidence of lice infestation dropped to an amazing 3 percent! The U.S. Army discovered that with the right equipment, good planning, plus plenty of soap and water, it could lick an age old foe—"cooties."