Tomorrow is the 100th anniversary of the Allies' biggest push on the Western Front of 1915. There are many good sources on this multi-dimensional effort, but different sources apply different names to the battles, something like the American Civil War where the Northerners and  Southerners used different terminology like Manassas vs. Bull Rull or Shiloh vs. Pittsburg Landing. Part of the confusion stems from the fact that all the operations were initiated the same day — 25 September —and from the further complication that one component involved a joint French-British offensive and the other was solely a French attack.

Here is a map to help keep this sorted out with some details to follow: 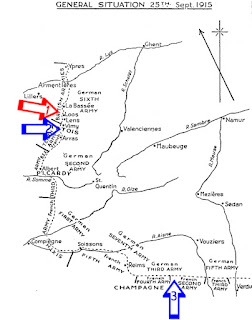 A.  Some sources group everything shown here under a heading something like: "the Allied Dual Offensive of 1915." That doesn't at all, help clarify where the fighting occurred, of course. Since Paris isn't shown on this map, let's use Compiègne as a starting point and consider some better options for naming this series of actions.

B.  North of Compiègne – Side-by-side British and French attack in Artois
Sometimes called Battle of Loos (many British sources) or Third Battle of Artois

What actually happened should provide us the best guidance. The British attacked around and to the north of the village of Loos (#1). The French, south of this area, in an assault that was imperfectly coordinated with the British effort ,captured the town of Souchez, east of the Notre Dame de Lorette  Ridge they had captured in the spring, and failed (again) to capture Vimy Ridge farther east (#2).
The two concurrent assaults did little to influence each other.s outcomes, but since there needs to be an inclusive term covering both, ROADS TO THE GREAT WAR  recommends: "The Battle of Artois-Loos". Only a few historians seem to like this alternative, but it keeps things clear and is technically accurate.