In earlier postings we have discussed what is one of the most overpowering war memorial in the world, the Italian Third Army Memorial at Redipuglia, Italy. (More details) The burial site of 100,000 fallen of the Third Army's battles on the Carso Plateau is shown below, viewed from the less imposing but equally remarkable nearby Remembrance Park of Colle Sant' Elia. 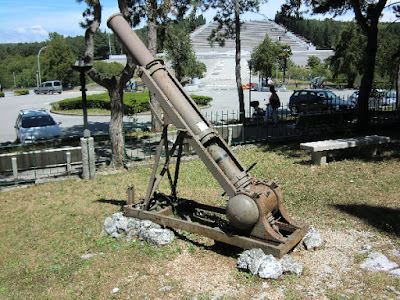 The current park, however, is the product of an evolution. In 1919 it was decided to convert the little knob at the base of the plateau from a wartime field cemetery to the final resting place for 30,000 of the fallen from the nearby battles. Here is the completed cemetery, which featured a memorial chapel at the crest. 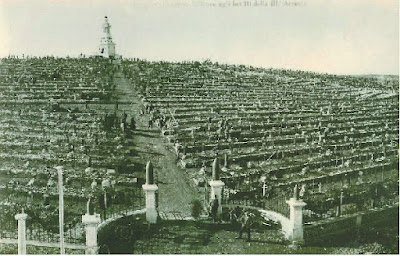 By the mid-1930s this was deemed inadequately grand by the Mussolini regime, and the larger formal memorial was built across the street on the edge of the Carso, where the very first Battle of the Isonzo was launched in 1915.  Colle Sant' Elia was converted to the park and outdoor museum at that time.  The entrance shown below was photographed from about the same position as the photo above. 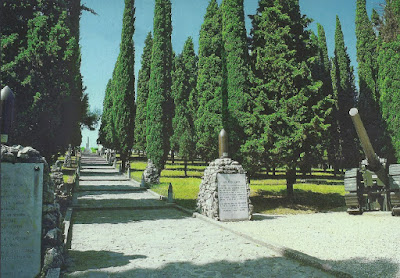 On a more human-sized scale, the Remembrance Park – I saw with my 2011 tour group – leaves visitors with much more of an impression than the huge formal memorial.  The site incorporates weaponry, equipment, and a dugout complex, but the feature that people enjoyed most were the uniformly constructed tributes to the branches of the Italian Army the mark the main pathway to the top of the hill.  Above is visible the marker for the Artillery Corps. 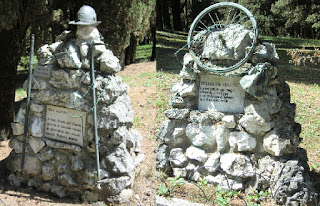 Here are the tributes to the Alipini mountain troops, and the cyclist troops of the elite Bersaglieri, light infantry. 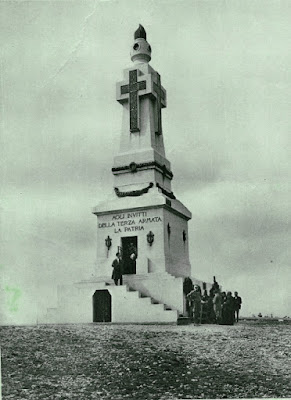 The original Third Army Memorial Chapel was dismantled in 1938 and replaced at the new monument. At the chapel site today is a simple Roman column dedicated to the fallen of all wars.