100 Years Ago: The Zeebrugge Raid


Zeebrugge on the Belgian coastline was an outlet for German U-boats and destroyers based up the canal at Bruges, and the British planned to sink three old cruisers Iphegenia, Intrepid, and Thetis, in the channel to block it. These would have to pass a long harbor mole (a causeway or pier) with a battery at the end, before they were scuttled. It was decided therefore to storm the mole using another old cruiser, HMS Vindictive, and two Mersey ferries, Daffodil and Iris II, modified as assault vessels. Two old submarines were to be used as explosive charges, under the viaduct connecting the mole to the shore. 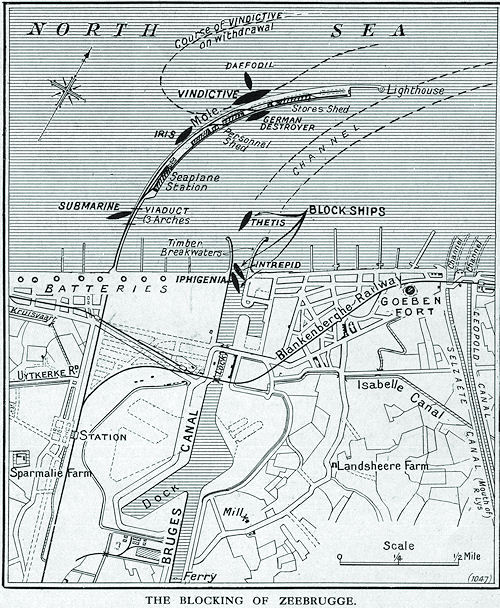 The attack went in on the night of 22–23 April, under the command of Commodore Roger Keyes. Vindictive was heavily hit on the approach and came alongside in the wrong place. Despite much bravery by the landing party, the battery remained in action. One submarine did succeed in blowing up the viaduct, but the first blockship was badly hit and forced to ground before reaching the canal entrance. Only two (Ipheginia and Intrepid) were sunk in place.


Much was made of the raid. Keyes was knighted, and 11 Victoria Crosses were awarded. The Germans, however, made a new channel round the two ships, and within two days their submarines were able to transit Zeebrugge. Destroyers were able to do so by mid-May.


Sources: BBC Website and The Times History of the War, Photos from Steve Miller and Tony Langley