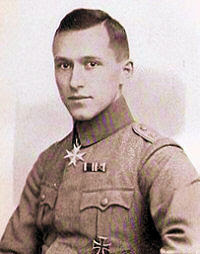 
It was [a preoccupation with issues of escape and autonomy] that led Jünger to abscond from school on 3 November 1913, head for Verdun and enlist in the French Foreign Legion. His plan was, apparently, to reach North Africa with the Legion, desert and make his way to what he imagined would be the primitive reaches of central Africa where he could lead some sort of grandiose life. In reality, however, he was bitterly disappointed to find North Africa thoroughly under the influence of its European colonists. Moreover, his attempts to [desert] from the Legion were foiled by the military police, and his father eventually managed to secure his discharge...as Jünger had actually been too young to sign the enlistment papers...

"Kriegsausbruch 1914", a short piece that Jünger first published in 1934, gives a highly subjective account of his own experience of August 1914, colored, of course, by the experience of 20 intervening years. Jünger describes how he and two workers were working on the roof of the family house, with the magnificent Lower Saxon countryside spread out around them, when the postman passed by and informed them that mobilization had been ordered. In Jünger's reconstruction of the passions of 1914, he decided almost immediately to volunteer...In this text, the outbreak of war, the presence of the Lower Saxon countryside symbolizing Germany, and the overcoming of social divisions when all three went on to celebrate in the local pub combine to produce an idealized memory of August 1914.

1914:
Jünger volunteers at the outbreak of the war. He takes a Notabitur [early examination to gain release for service] and matriculates at Heidelberg University before undertaking basic training from October until December, when his recruit company joins the Füsilier-Regiment 73 at the Champagne front.

1915:
Jünger's unit remains in position around the area of Bazancourt. February and March are spent on a training course in Recouvrence. In April the regiment is deployed to Lorraine and Jünger is wounded for the first time at Les Éparges. Jünger recovers and spends the summer at an officers' training course at Döberitz, returning to the regiment as Fähnrich (ensign). There then follows an extended period [of positional war] round Douchy and Monchy in the Artois region. At the end of November he is promoted to lieutenant.

1916:
The Stellungskampf in Artois continues. In April Jünger attends another training course, returning to the front in June, where the regiment comes under increasing pressure in the buildup to the Somme offensive. In heavy fighting around Guillemont he is again wounded and evacuated, while his unit suffers almost total casualties. He returns to the front in November and is assigned to Divisional Intelligence as a reconnaissance officer and is wounded again near St. Pierre Vaast. He is awarded the Iron Cross, 1st Class. He returns to the regiment and again becomes a reconnaissance officer.

1917:
Jünger spends January on a company commanders course. From now on, Jünger is frequently appointed company commander of various companies within the regiment. In March he commands a patrol covering the German retreat from the Somme. At Fresnoy he commands an observation post. In May the regiment takes up positions on the Siegfried Line. In June a forward standing patrol commanded by Jünger has a violent encounter with British/Indian fighting patrols. The regiment then moves to Cambrai for training. Jünger is involved in training a Sturmtrupp. In late July the Regiment moves to Flanders and Jünger takes part in fighting round Langemarck, playing an important role in the defence of the Steenbach. In September he leads a fighting patrol against the French trenches at Regniéville, which ends disastrously. October sees him in Flanders again in the area around Passchendaele, once more as a reconnaissance officer. In late November the regiment is involved in the successful counterattack against the British tank offensive at Cambrai. This involves intensive trench fighting in the course of which Jünger is wounded and subsequently awarded the Ritterkreuz des Hausordens von Hohenzollern.

1918:
January, February, and March are spent in preparation for Ludendorff's MICHAEL offensive. Jünger's company takes a direct hit from a shell in the last stages of the move forward. Jünger takes part in an attack on a Scottish position by Écoust [closer to Vaulx]  and is hit twice. He rejoins the regiment in June in an exposed position around Puisieux-le-Mont, fighting British advances against the odds. In August, the regiment undertakes a desperate counteroffensive near Cambrai. Jünger is badly wounded but continues fighting and, despite being surrounded, manages to evade capture, a feat for which he was awarded the Pour le Mérite. The remainder of the war is spent in a military hospital.

The above represents a summary of Jünger's war service based on In Stahlgewittern and is essentially an account of Jünger's service with the 73rd Füsilier Regiment, mapping neatly with independent accounts given in the two available regimental histories. What is particularly striking is that he served exclusively on the Western Front and that he saw action in the most intense battles of the war-—on the Somme, at Cambrai, at 3rd Ypres and the MICHAELoffensive of March 1918. In other words, he was involved in those battles which saw the highest casualties and the highest concentrations of firepower and thus also inflicted the greatest sense of anti-modern absurdity, chaos, and ambivalence.

From: Writing and Rewriting the First World War: Ernst Jünger and the Crisis of the Conservative Imagination, 1914–25, Thesis Submitted for the Degree of Doctor of Philosophy. John King, St. John's College, Trinity University, 1999.

Dr. King is the editor of the outstanding Ernst Jünger in Cyberspace website. Visit