What Was the Liberty Loan Program? 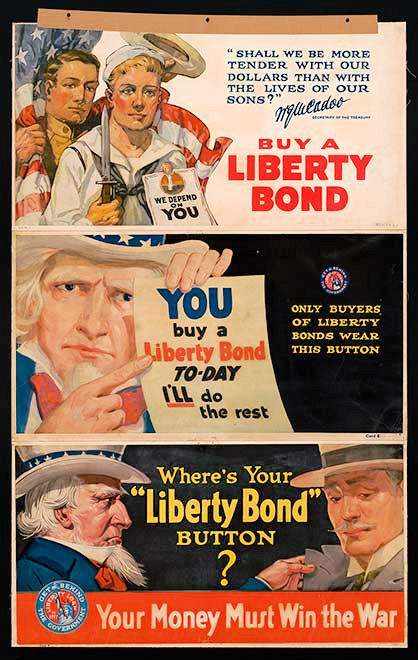 Not wanting to disrupt the economic advances the nation had enjoyed under neutrality, Secretary of the Treasury William McAdoo and the government as a whole heavily promoted the sale of war bonds called Liberty Loans. Mounting four Liberty Loans drives and one Victory Loan drive, the U.S. government raised $20 billion with nearly one-third coming from people making less than $2,000 annually.

The Liberty Loan plan had three elements. First, the public would be educated about bonds, the causes and objectives of the war, and the financial power of the country. McAdoo chose to call the securities “Liberty Bonds” as part of this educational effort. Second, the government would appeal to patriotism and ask everyone—from schoolchildren to millionaires—to do their part by reducing consumption and purchasing bonds. Third, the entire effort would rely upon volunteer labor, thereby avoiding the money market, brokerage commissions, or a paid sales force. The Federal Reserve Banks would coordinate and manage sales, while the bonds could be purchased at any bank that was a member of the Federal Reserve System. Celebrities exhorted citizens to buy bonds. Artists produced posters that were powerful tools in each of the separate bond drives. The three posters shown here are "car cards," so called because of their placement on buses, trams, and subway cars to attract the attention of riders. 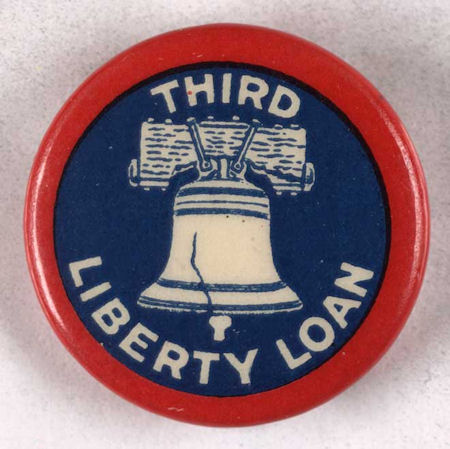 Despite the success of the 1917 Liberty Loan program, as war expenditures rapidly increased and debt ballooned, government officials realized borrowing alone could not fully fund the war—taxation too must play a role. The War Revenue Act of 1918 forever changed American taxation. Before the First World War, three-fourths of federal revenues were derived from custom and excise taxes; after the war, this would be flipped, so that the same percentage would now come from income, profit, and estate taxes. Still, bond drives remained crucially important. Bond subscribers were given a button with every purchase, and, according the poster to the left of the case, were expected to wear it as a sign of patriotism.

Sources:  The Library of Congress and Federal Reserve Bank Websites