Martinique and the Great War

During World War I, France drew heavily upon the manpower and natural resources of its colonial empire to support its war effort.  In 1913, the French had instituted compulsory military training for all males living on their southern Caribbean island of Martinique.  Beginning in 1914, the colony had to furnish 1,000 men per month to the French Army.  Approximately 18,000 of the mostly black Martiniquais served in the French military between 1914 and 1918.

In France, Martiniquais were treated much better than soldiers from other French colonies as they were considered more loyal to France. Although there was some racial tension, the French Army placed the black Martiniquais into racially mixed regiments containing white troops from metropolitan France. Many were promoted to high ranks in the French non-commissioned officer corps over the course of the war.  Although the sons of the wealthy white Martiniquais planter and merchant class could join the French officer corps, the black Martiniquais were excluded from becoming commissioned officers. Overall, Martiniquais soldiers had an admirable record for bravery and loyal service, and 1,306 of them died during the war.

In addition to providing manpower, Martinique was also involved in other aspects of the war effort. French authorities requisitioned Martinique’s entire rum production for the French Army.  Many sugar mills were converted to distilleries to produce molasses that was then shipped to France. There the molasses was further refined into industrial alcohol used in manufacturing munitions explosives. During World War I Allied naval forces frequently used the island’s ports for logistics support, including U.S. Navy warships after America entered the war in 1917. This was not the case in World War II, when the Vichy Government ruled the island after the fall of France in 1940. In mid-1943 a coup by Free French sympathizers overthrew the Vichy officials, and Martinique’s ports were opened to the Allied powers.


During the 1920s and '30s, 22 monuments were built on the island to honor the war dead. The largest memorial is in the city of Fort-De-France, Martinique’s capital city, while the 21 others are more modest in size, such as in  Les Trois-Îlets as shown above, often being just a statue of a Poilu infantryman. As in mainland France, most list the names of the local men who perished during the war. 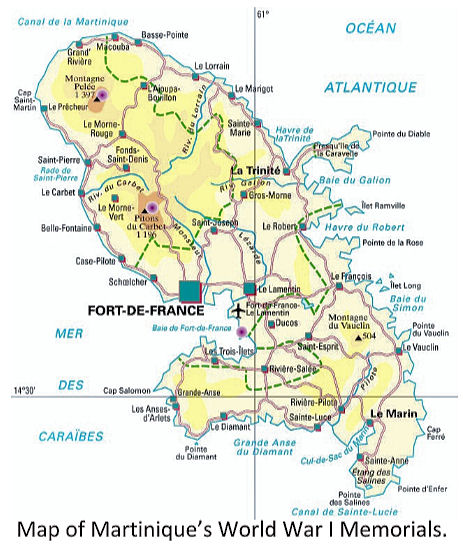 In 1946, Martinique ceased to be a French colony and became an overseas department of France. The island eventually became a full-fledged department of France when the “overseas” label was dropped.  Today, native Martiniquais elect voting representatives to the French parliament in Paris and enjoy all the privileges and responsibilities of full French citizenship.