The German March Offensive of 1918, Operation MICHAEL, was a tactical success, but a strategic failure.  They had failed to knock the British Army out of the war, and they had failed to take the critical rail junction at Amiens.  By 18 April, it was clear that the Germans would attempt to push on to Amiens again—which just a few weeks earlier the Australians had fought so hard to defend. Villers Bretonneux's defense had been given over to British troops while the Australian divisions regrouped. The enemy attack was spearheaded by tanks, which pushed through the British defenses. On 24 April, British troops were defending Villers-Bretonneux. The Germans attacked at dawn, and with the aid of 13 tanks, which they were using for the first time, they captured the town.

Orders for the immediate recapture of Villers-Bretonneux were met with a plan to launch an attack by two Australian brigades, the 13th and the 15th. The unconventional night attack began at 10 p.m. on the 24th. One brigade approached from the north and one from the south, meeting at the village's eastern edge, thereby surrounding the Germans and driving them from Villers-Bretonneux and the adjacent woods. The Australian brigades attempted to join forces to the east of the town. They were unable to join up in the dark, and many Germans managed to escape. 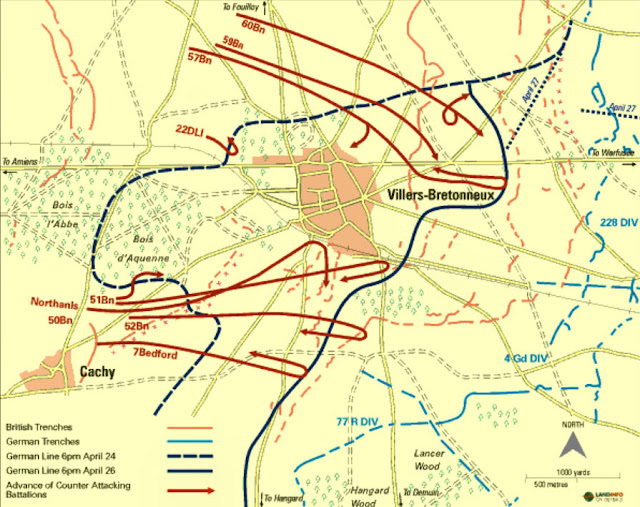 After dawn, the gap was gradually closed, and Australians entered the town from the east and British from the north and west. Villers-Bretonneux was cleared of enemy troops on 25 April 1918, the third anniversary of the Anzac landing at Gallipoli. This action marked the effective end of the German offensive that had commenced so successfully more than a month earlier.This battle was unique in that it was the first involving tank-against-tank fighting, demonstrating the significance that tanks had increasingly come to assume in 1918.

Because their critical and well-recognized double defense of Amiens, the area has a strong resonance for Australians. The nation's national war memorial is just north of Villers-Bretonneux and is where France and Australia hold the main annual commemoration of Anzac Day.  Australia's Unknown Soldier was selected from the nearby Adelaide Commonwealth Cemetery.