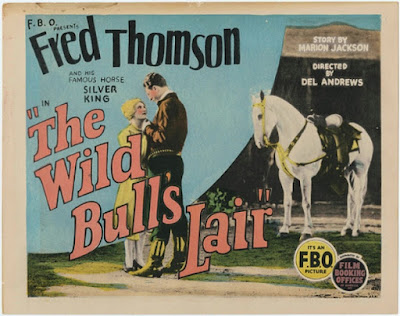 Silent film star Fred Thomson (1890–1928) was a veteran of the AEF's 143rd Field Artillery Regiment. He got "over there" too late to see combat, but he almost stole the show at the 1919 Inter-Allied Games, when he won the hand grenade throwing competition with a phenomenal 245 foot 11 inch heave. His growing screen career, alas, was ended prematurely on Christmas Day 1928, when he died from tetanus after stepping on a nail.

Interestingly, he was the chaplain of his regiment.  The son of a minister from Pasadena, California, Thomson attended the Princeton Theological Seminary, where he also  showed himself to be an outstanding all-around athlete. He was ordained as a Presbyterian minister in 1913 the same year he married his college sweetheart, Gail Jepson.  Sadly, she died of tuberculosis three years later.  When America joined the war, Thomson volunteered to serve as a chaplain.

While in training he broke his leg playing football.  Movie star Mary Pickford visited the patients in the military hospital with her friend, screenwriter Frances Marion. Thomson and Marion soon agreed to marry after the war was over and did so in November 1919. Mary Pickford was the bridesmaid and invited Thomson to appear in one of her films. The handsome and athletic Thomson had an inside track to movie stardom and seized it. He appeared in 30 films before his unlucky accident.