The History of the Trench Coat 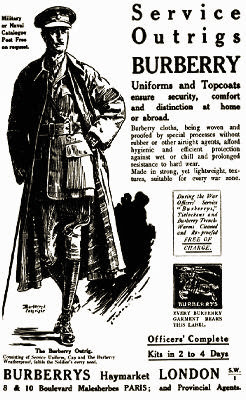 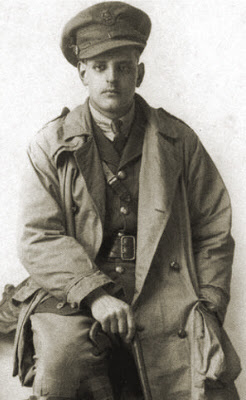 Despite its uniform-like military style that can remind one of the horrors of the Great War where it originated, the trench coat remains a popular, influential, and even symbolic item of apparel. It was adapted from an earlier design by the famous British designer, Thomas Burberry, to keep British military officers dry and warm in the trenches. He had previously patented a very tight weave of cotton gabardine using long fiber Egyptian cotton that was then treated with a chemical to withstand water. The diagonal weave also cut surface tension to further repel water. This fabric was extremely strong and did not tear easily, adding to its desirability for military wear. A gabardine coat from Burberry was worn by high-ranking generals during the turn-of-the-century Boer War in South Africa. When the Great War came, the British War Board authorized an updated version for the army's combat officers. British officers embraced the coat immediately, and its popularity spread to the Yanks when America joined the war. In Stars and Stripes an advertisement even appeared in 1918 for trench coats for women, made in America for the Donut Dollies, Hello Girls, and nurses. 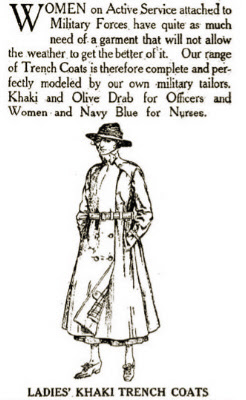 Burberry's new design, like military uniforms, featured epaulets (shoulder straps), a buckled belt with D-rings, and was double-breasted. A storm or gun flap on the right shoulder kept water from running inside when the officer raised a weapon. Cuff straps made the sleeves a tighter fit when needed or could hold a map. A rumor circulated that these or the D-rings were for carrying hand grenades, but most agree that that would not have been a safe practice. 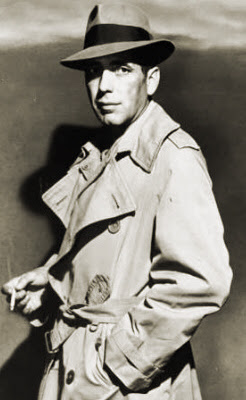 Formerly, long ankle-length coats called great coats were also issued, but the trench coat was made shorter so as not to drag in the mud and water that prevailed in the trenches. The coat was excellent in cold weather with a woolen insert and also served as an emergency sleeping system. The trench coat quickly earned a high reputation for the protection and mobility it provided to the men fighting in the front lines. In World War II, the trench coat was issued in even greater numbers as part of the uniform to Americans, British, and Russians. Today the trench coat still serves in the world's militaries as weather protection for dress uniforms.

The trench coat has never faltered in its popularity for both men and women in civilian fashion. Hollywood helped boost its appeal. In movies after the war, the trench coat symbolized mystery and adventure—it was the attire of secret agents and private detectives. Who can forget Humphrey Bogart in his trench coat in Casablanca or The Maltese Falcon, or Alan Ladd in This Gun For Hire? For women as well, the wearing of the trench coat signifies allure and danger—recall Marlene Dietrich, Ingrid Berman, and Joan Crawford in their great roles.

The classic Burberry trench coat is still available today for about $2,000. Newer versions that are lighter and more flexible of microfiber and modern fabrics range from $200 to $500. London Fog still sells a classic double-breasted style with wide collars and button cuffs, but it no longer has the shoulder epaulets.