How Progressive Reformers Helped the AEF

During the war, the War Plans Division of the General Staff distributed a copy of Maj. Gen. David C. Shank's The Management of the American Soldier to all officers responsible for morale, since the book contained "valuable suggestions..., of assistance to those who have charge of the education, recreation and character building of the Army." According to Shank's book, officers should know the names of all men in their companies, treat the soldiers in the same manner they would like to be treated, discipline without nagging, and avoid destroying self-respect by instilling pride. Shank regarded efficiency as the key to the success of any officer and concluded that true efficiency came from managing men as a way of preserving harmony...

At the start of conflict, the War Department hired a number of well-known Progressive reformers, among them Raymond Fosdick (former settlement worker and New York's commissioner of accounts), Joseph Lee (president of the Playground Association of America), and Joseph Mott (secretary of the Young Men's Christian Association [YMCA]).

Secretary of War Newton D. Baker had previously been a municipal Progressive reformer during his days as mayor of Cleveland. Leading social welfare organizations assisted the military in the socialization of both native-born and foreign-born troops. This included the YMCA, the Young Women's Christian Association (YWCA), the Salvation Army, the Playground Association of America, the American Social Hygiene Association, and the American Library Association. The War Department also enlisted the help of the Knights of Columbus and the Jewish Welfare Board to provide for the needs of its Catholic and Jewish soldiers. 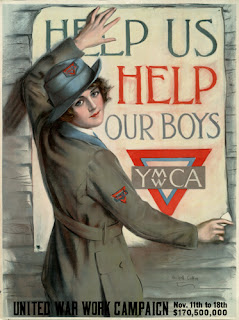 Similar to their work in the civilian societies, the goal of these social welfare organizations was to keep soldiers away from negative influences such as prostitution, alcohol, and gambling and direct them to positive alternatives like sports, music, and reading. As venereal disease quickly spread through the ranks and crippled several divisions in the Allied armies, socializing American soldiers became even more imperative. Adopting a social welfare philosophy resulted in revolutionary changes within the military structure, including innovative training methods that emphasized social, educational, recreational, and character-building activities, all designed to socialize and "morally uplift" the soldiers to create an effective military.

All these factors—Progressive socialization and Americanization, the "management of men," and the new emphasis on morale—came together with the training of foreign-born soldiers during the First World War. The War Department approached the training of immigrant soldiers with a rational pragmatic approach in the "managing of men," and they also adopted social welfare techniques in socializing, Americanizing, and bolstering the morale of these foreign-born men. World War I foreign-born soldiers were part of the largest group of immigrants to arrive in the United States in its history. Between 1880 and 1920, over 23 million people, primarily from southern and eastern Europe, came to the United States. They were alienated from their homelands by severe economic, political, and religious conditions and attracted to America with the promise of economic security and the hope for religious and political freedoms.

Source:  Americans All! Foreign-Born Soldiers in World War I by Nancy Gentile Ford