The World War One Historical Association (WW1HA) annual Norman B. Tomlinson, Jr., prize for 2017 for the best work of history in English on World War One has been awarded to two exceptional historians: Robert Gerwarth for his The Vanquished: Why the First World War Failed to End (Farrar, Straus & Giroux); and Richard Faulkner for Pershing's Crusaders: The American Soldier in World War I (University Press of Kansas).
Last week we presented our review of Mr.Gerwarth's The Vanquished.  Today we are publishing our review of Pershing's Crusaders, first presented in ROADS TO THE GREAT WAR on 15 August 2017.


Pershing's Crusaders: The American Soldier in World War I 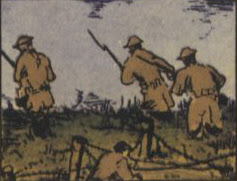 If you want to know almost everything there is to know about the varied backgrounds, feelings, and experiences of the men who were drafted and served in the American Expeditionary Force from 1917 to 1919, then this is the book for you. Richard Faulkner has produced a nearly 800-page volume, with copious notes and detailed index, that is virtually encyclopedic in scope. Thus the 24 chapters of Pershing's Crusaders take us in detailed yet readable narrative from the earliest days of recruitment to final homecomings. After finishing the book I had to agree that the author has done exactly what he set out to do, namely "present a more holistic and detailed exploration of the many facets of the doughboys' lives and attitudes than has been given in previous accounts" (p. 5).

Not surprisingly, a recurrent theme throughout is the extent to which the military and the country were unprepared to fight in a world war. The situation necessitated an explosion of haste, often with unfortunate results. Although not everyone was enthusiastic about the war, millions of men eagerly reported to draft boards and were processed to training camps that were being rapidly constructed. It was impossible to organize these men and train them all without some pitfalls. Medical exams were cursory and resulted sometimes in passing unfit recruits for training. The most startling example given by Faulkner is of the recruit who was sent on to training camp where he was found to have only one hand. As in Britain in 1914, many recruits trained in their own clothes, uniforms being in initial short supply. Training was often, as the author puts it, "wildly uneven and woefully incomplete" (p. 326). Sometimes this resulted in green young soldiers finding themselves at the front without having fired their rifles, let alone being prepared for the smells, sounds, and sights of trench warfare.

From beginning to end, Faulkner provides statistics on every aspect of the war, the fruit of his having combed through thousands of letters, memoirs, documents, and reports of the American Expeditionary Forces. For example, the recruiting process garnered a great deal of information about America's youth: the weight of the average inductee was 141.54 pounds, his chest measured about 34.7 inches, and his average height ran around 67.5 inches. (Texans were on average an inch taller than the rest.) We find out how many of these soldiers and sailors were drowned on their way to Europe and how many were never to return.

Doughboy experience, from fighting to drinking to venereal disease to relationships with chaplains and the British and French soldiers, all is covered with intriguing statistics in this book. It's interesting to find that the Doughboys had little respect for their French or British comrades (excepting the Scots) but liked the ANZACS and Canadians. On the other hand, the British Tommy tended to "look with contempt on the striplings who had come in to win the war" (p. 291), and the French could be quite impatient with the newcomers—"One Frenchman told his American charges that their failure to grasp trigonometry left him dumbfounded that they held commissions in artillery" (p.287).

By the time I finished this book I felt there was little left to know about the various experiences of the American soldiers in the Great War. This includes their interactions with YMCA, Knights of Columbus, and other civilian volunteer groups plus the impressive array of educational opportunities offered to our soldiers in France. Faulkner also provides the sad details of racism, wounds, death, mutilation—including the legend of a "basket case"—and the impact of the influenza epidemic on the army. And true to his statistical style, the author reminds us that 4,452 members of the AEF are still missing today (p. 598). 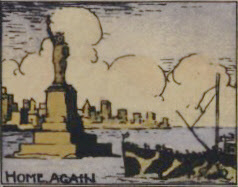 Additionally, many soldiers (although not all of them) suffered keen disappointment at getting to France but never coming close to combat. Some 546,000 troops were assigned to non-combat duties with the Services of Supply and another 173,008 worked in other noncombatant jobs behind the lines (p. 351). Moreover, about "half of the soldiers mobilized for the war, some two million men, never made it closer to France than Camp Upton, New York" (p. 606). Nevertheless, in one way or another WWI inevitably changed millions of Americans. As one West Virginia Doughboy admitted on his return home, "I am out of the army, but I have a feeling it will be a long time before the army is out of me" (p. 633). This book is not only a fascinating read but also a seminal volume to keep as a reference and a reminder of how things were for Pershing's Doughboys.


A full listing of the past Tomlinson Prize winners can be found here: