Just as poets throughout Europe perceived the oncoming catastrophe and tried to capture it in their
writings, visual artists did so as well. This was especially true just before the outbreak of war in the
community of German Expressionists, who were busy exploring new ways to express their inner visions  by distorting and dramatizing reality. Four prewar examples are shown. Max Oppenheimer's "Bleeding Man" (1911) suggests a bloody sacrifice to come for young males. Franz Marc, who would die at Verdun in 1916, was inspired by the Balkan Wars to paint the ominous "Wolves" (1913). Ludwig Meidner was driven by his premonitions to spend 1913 cranking out a series of apocalyptic landscapes, one of which is shown below, and a detail from another is shown on our cover. Otto Dix—of the artists shown here—is probably most associated with the war for his later grotesque depictions of battle and its casualties. The detail below showing the early-morning flight of sinister-looking crows over an intensely lit field is from his "Sunrise" (1913). 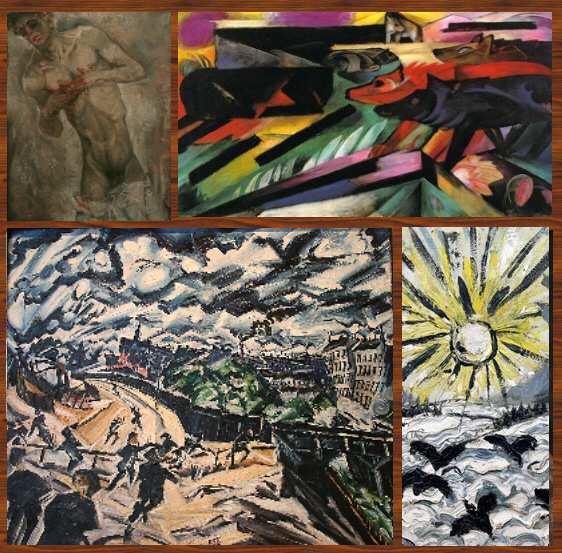 After the war Meidner tried to explain what was happening at this time:

I unloaded my obsessions onto canvas night and day — Judgment Days, world's ends, and gibbets of
skulls, for in those days the great universal storm was already baring its teeth and casting its glaring
yellow shadow across my whimpering brush hand. "Mein Leben" 1919