The Consequences of Mobilizing Germany's Youth for War

Commentary by Bryan Ganaway from a review of Youth in the Fatherless Land: War Pedagogy, Nationalism, and Authority in Germany, 1914–1918. By Andrew Donson, 2010 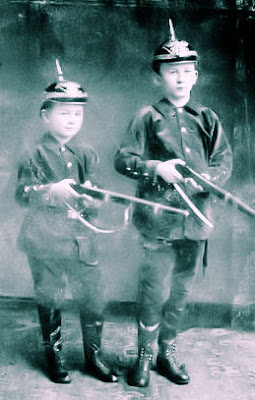 Before 1914 Imperial Germany used education to regulate and control children to a greater degree than France, England, and the United States. This included nearly fifty thousand officials whose sole job was to mobilize patriotic youth via extracurricular activities. However, plenty of teachers wanted to reform the regimented curriculum in an effort to cultivate critical thinkers rather than manufacture chauvinists.

When war began in 1914, the government worked hard to remake the curriculum and institute "war pedagogy" to mobilize children behind the state. This included a document by Theobald Ziegler entitled "Ten Commandments of War Pedagogy." Commandment seven reads as follows: "Thou shalt speak of battles in history class and be happy" (p. 244). In the short run, the new curriculum succeeded in mobilizing youth across diverse segments of society (male and female, middle-class and working-class, Protestant and Catholic, German and non-German) behind the monarchy. Over the long run, however, [End Page 164] war pedagogy functioned in quite a different way. Implemented by progressive teachers who saw it as a way to finally enact their reform program, it provided a framework for free essay writing, critical discussion in class, and individualized reading programs. In other words, the instructors told children to support the war, but also to think about it regularly.

There is no doubt that the government worked hard to mobilize youth in school and via massive, state-sponsored volunteer programs. Popular juvenile war literature and movies also supported these initiatives. By 1916, however, the dreadful mismanagement of the home front by the military led to severe shortages of food, coal, and clothing that completely undermined "war pedagogy" and caused at least some youth to question their teachers and the state. Over one million urban children had to be taken out of school and sent to farms so they could eat. Many of their teachers (not to mention their fathers) had long since been conscripted, and this weakened both the schools and the family as institutions designed to maintain order. The result was an increase in independence for many youth. From the perspective of parents this led to a rise in impertinence, sexual experimentation, and crime. Starving urban teachers lost enthusiasm for "war pedagogy," and the most mobilized youth drifted to the right or left fringes of the political spectrum in search of an alternative to the government in Berlin.

For all its undoubted military success, the regime in Berlin criminally mismanaged the home front, and this thwarted its efforts to indoctrinate youth. As the war situation worsened, youth slowly moved away from the government (both on the left and on the right), showing the limits of state authority even in time of war. The author reminds us that many of the early Nazis were from the birth cohort of 1900–1908. Similarly, some of the most die-hard Communists reached political consciousness in Social Democratic youth organizations during the war.