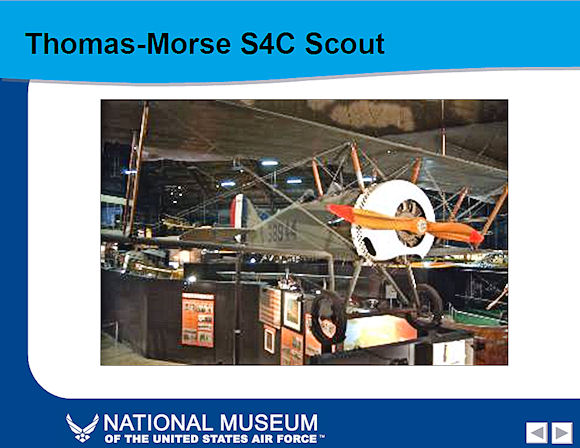 The Thomas-Morse Scout became the favorite single-seat training airplane for U.S. pilots during World War I. The Scout first appeared with an order for 100 S4Bs in the summer of 1917. The U.S. Army Air Service later purchased nearly 500 of a slightly modified version, the S4C. Dubbed the "Tommy" by its pilots, the plane had a long and varied career.

Tommies flew at practically every pursuit flying school in the United States during 1918. After the war ended, the Air Service sold them as surplus to civilian flying schools, sportsman pilots, and ex-Army fliers. Some were still being used in the mid-1930s for WWI aviation movies filmed in Hollywood.

It was designed by Benjamin Douglas Thomas (no relation to the company owners), who also assisted with the design of the Curtiss JN-4 Jenny. The Scout was a trim little single-seat, biplane that was originally powered by a 100 hp Gnome Monosoupape 9-B rotary engine, but beginning with the 52d aircraft, the engine was replaced with the more reliable 80 hp (60 kW) Le Rhône C-9. The first flight was in June 1917 and it attained a speed of 95 mph (153 km/h). The first order was for six prototypes, with 100 improved S-4Bs ordered on 3 October 1917 and an additional 25 aircraft ordered for Britain.

It could be easily converted into a seaplane and was given the US Navy designation S-5. It was identical to the S-4B, but the top speed was reduced to 90 mph (145 km/h).  It was tested at the Naval Air Station at Diner Key, off Miami, Florida, and six S-5s with floats were ordered for the U.S. Navy.

On 18 January 1918 the U.S. War Department placed an order for 400 improved S-4C models. Instead of using cables for the ailerons, the C model used a torque tube system, the ailerons and elevators were reduced in area, and provisions were made for a .30 caliber Marlin machine gun, synchronized to fire through the propeller, although not all aircraft were delivered that way. A total of 447 S-4Cs were built.