Alfred Bastien was a well known and successful Belgian artist prior to the Great War. He helped complete the successful Panorama du Congo, exhibited at the 1913 Ghent World Fair, which was a prequel of sorts to his grand postwar Panorama de l'Yser, undoubtedly his most famous and acclaimed work, if not the most artistically accomplished.

After serving in the Garde Civique like many other Belgians, Bastien fled to Great Britain after the fall of Antwerp in October 1914 and despite his age (43) volunteered for the Belgian Army. He was eventually transferred to the Section Artistique in Nieuwpoort along with many of his prewar artist friends and acquaintances. From 1915 onward, he made many drawings and sketches of the situation on and behind the Belgian lines on the Yser river. The British wartime magazine Illustrated War News, among others, regularly published his work, quite often in distinctive and semi-panoramic, multi-color two-page spreads, of which several are shown above. In 1917, on personal request by Lord Beaverbrook, who owned several of Bastien's prewar paintings, he was seconded to the Canadian Army until September 1918, during which time he produced many works of art specifically related to the Canadian war experience.

After the war, Alfred Bastien painted a grand panorama of the Yser Front in 19th-century tradition, a project he had been planning since 1914 and which, according to his own telling, had been suggested to him by King Albert in 1914. During his wartime service in the Belgian Army Bastien made many sketches, drawings, and photos that were later either incorporated into the Panorama itself or were useful studies in technique and effects. Several of such drawings are shown above. The Panorama de l'Yser painting itself measured 115 meters in length and 14 meters in height and was initially exhibited in Brussels. In the mid 1920s, a permanent building was constructed in Ostend to house the Panorama along with a multitude of props and decor. The intention of moving the Panorama to Ostend was to capture a share of British "war-tourism," since most British coming to visit relatives' war graves arrived by steamer in Ostend before proceeding to the area of the Ypres Salient. The Panorama opened at Ostend in 1926. Here are four details from the mural. 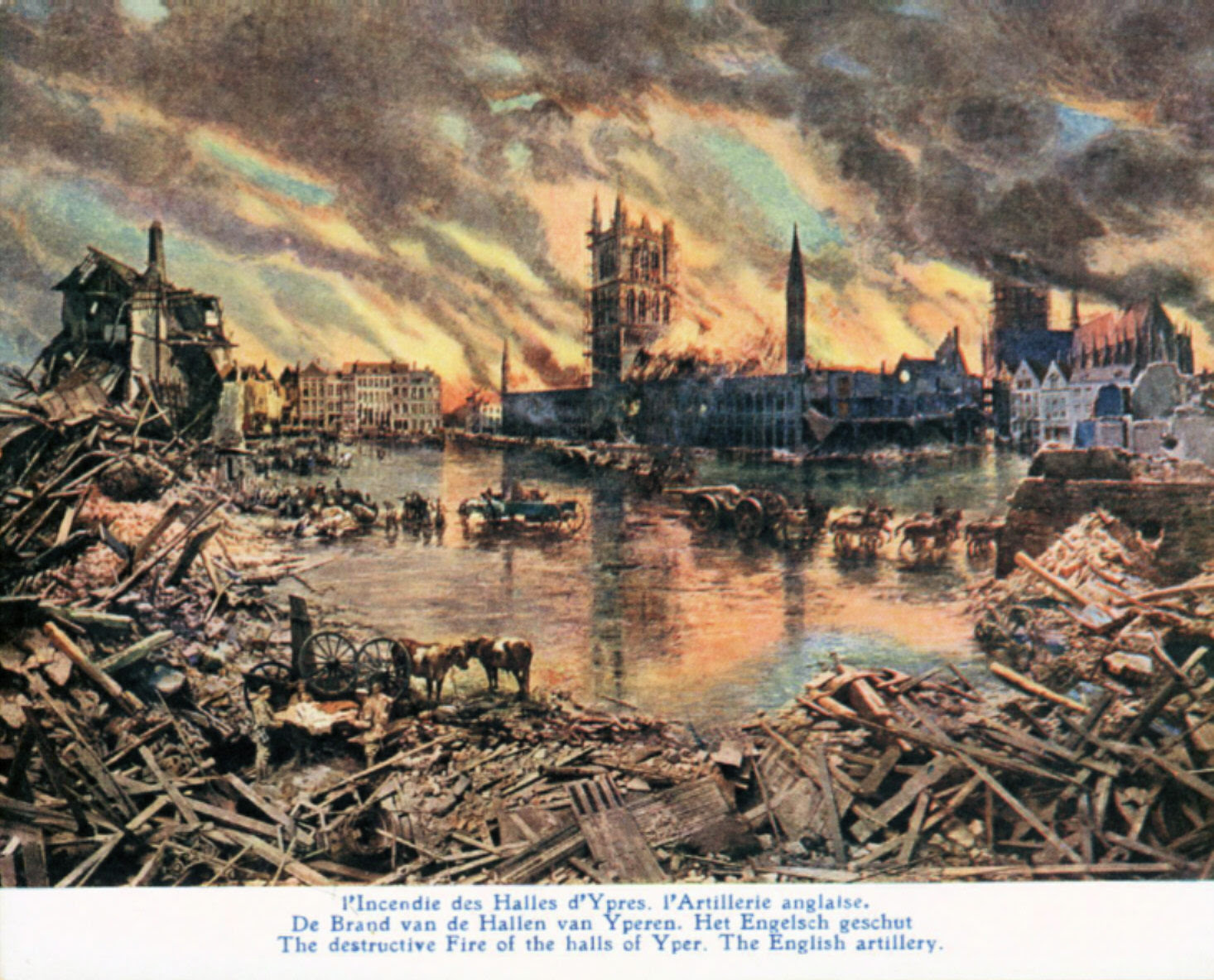 While the intent was to provide spectators with a sense of "being there" on the Yser Front in person, the depiction of the landscape, while extremely realistic in terms of style and detail, was not an actual view that could have been seen at any time during the war. The Panorama not only depicted various battles and incidents from the Yser Front in Belgium in 1914 and 1915, but the central viewpoint from which spectators viewed the battlefield was also an imaginary place. For nowhere in all of Belgium could all the landscapes and towns and villages and rivers have been seen in real life. Just as cyber artists nowadays create "virtual realities" that appear to be highly realistic, back in 1920 Belgian artist Alfred Bastien created a virtual reality scene in which he tried to portray all the drama and heroism of the Yser Front in Belgium. 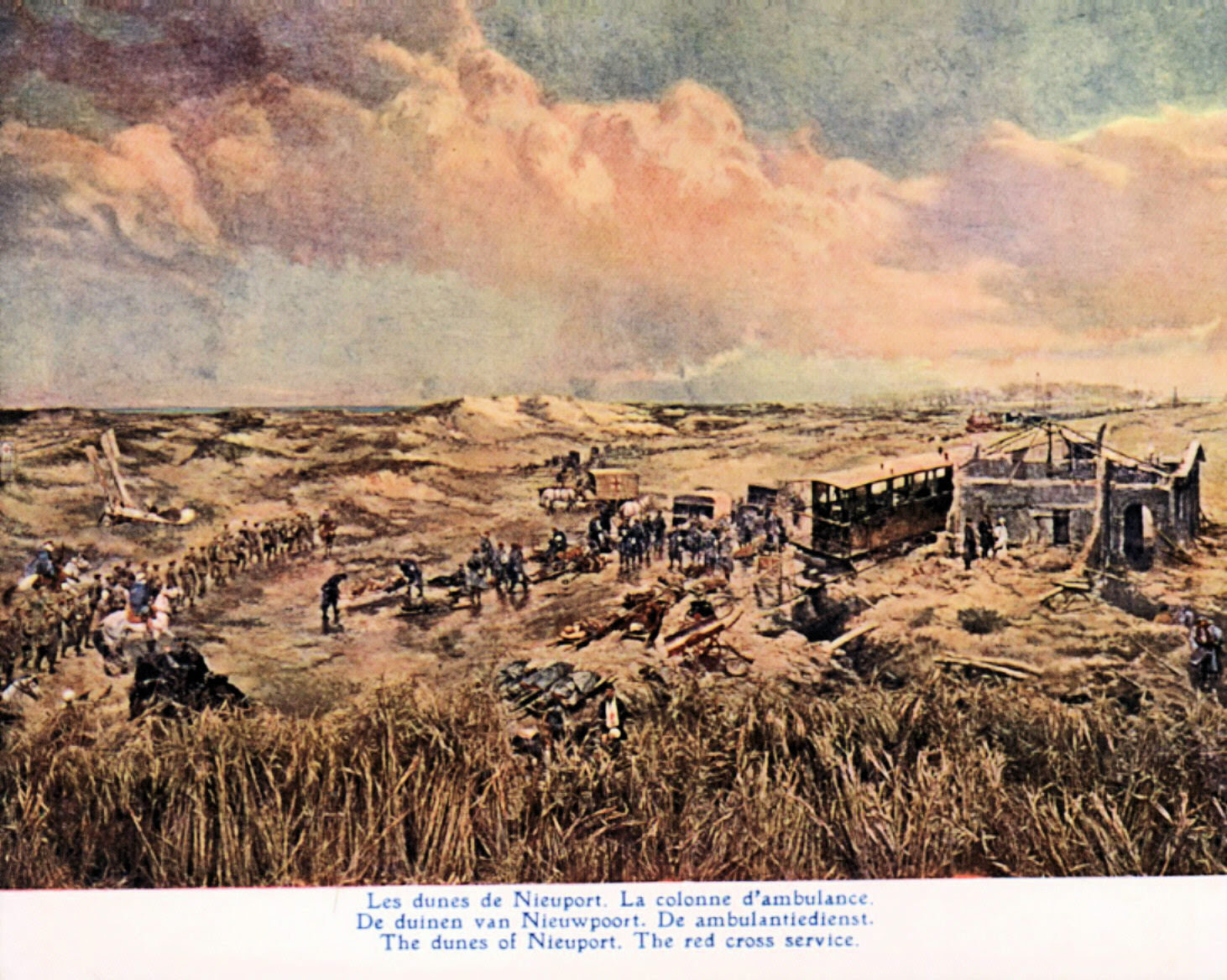 Financially the Panorama was great success, for Bastien, who received a tremendous fee for the painting; for the consortium of businessmen and banks that provided funds and capital; and for the city of Ostend, which provided real estate and a newly constructed building to house the Panorama. The initial investment was repaid many times over, from entrance fees and from (by modern standards) modest merchandising of postcards and prints. To give a relative idea of the finances involved, the actual cost of the painting materials (oil paint, linen, brushes etc.) was estimated at around 40,000 BF, the cost to construct the new building at Ostend was 550,000 BF, and Bastien's fee itself was set at 350,000 BF. Entrance fees for customers was 3 BF. While on exhibition in Brussels until 1925 it is estimated that more than 800,000 customers visited the Panorama, amongst them many of the crowned heads of Europe, presidents and foreign emperors alike, all to great acclaim by the news media. 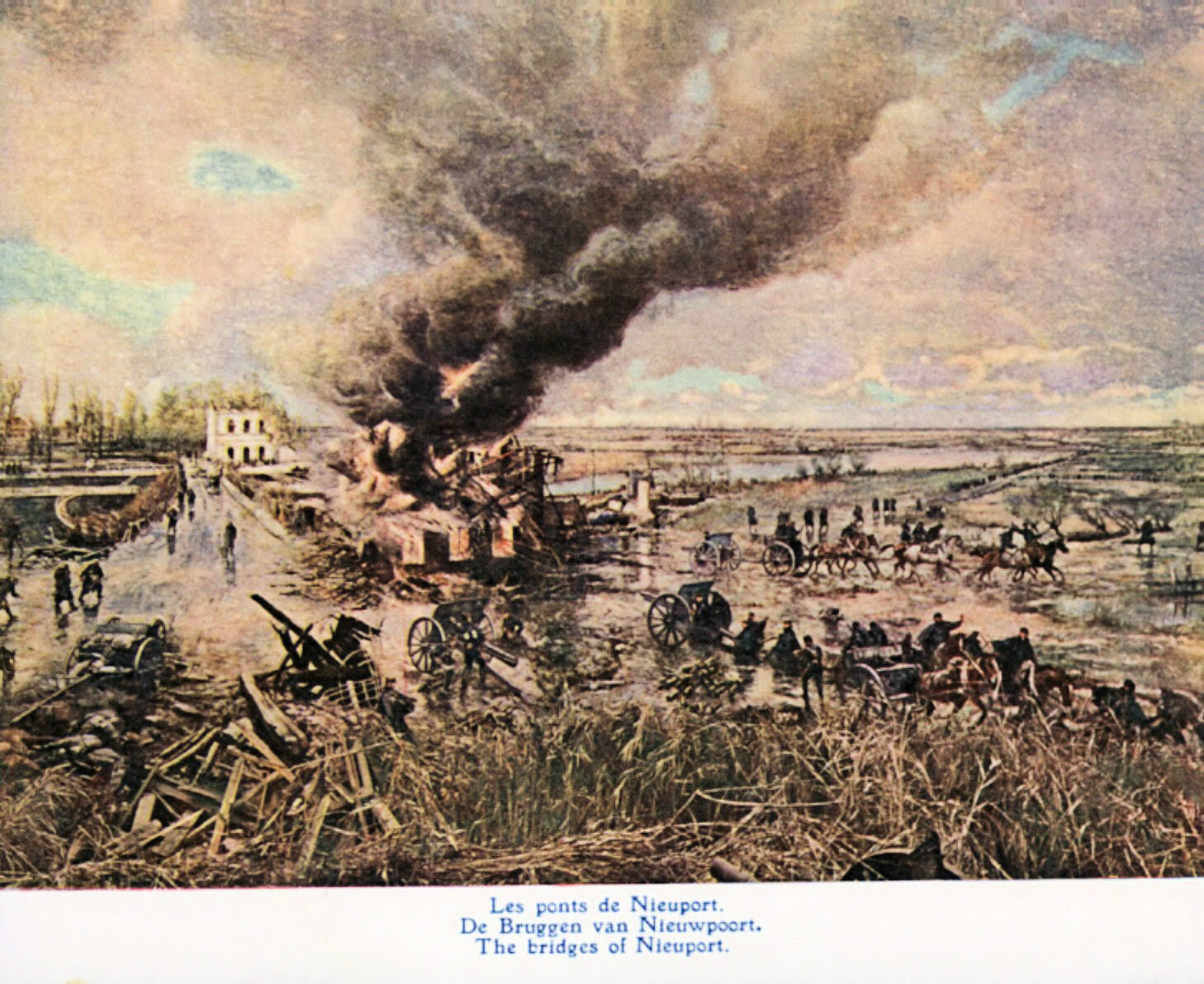 Of course in completing a work of such dimensions it is obvious that Bastien could not do all the painting himself. Several of his wartime friends and fellow artists from the Section Artistique participated in this grand project. The initial sketching in of the broad outline in charcoal of the Panorama took about a week's time to complete, while the actual painting and varnishing took one year's time. The Panorama was set up in a circle, with paying spectators having a viewing place in the center. Careful attention was given to the lighting effects and the placement of objects in the foreground, in order to create a more believable optical illusion. Many postcards and quality prints in all sizes and colors were made of this early 20th-century artistic extravaganza. The scans in this section are from a series of large-sized color postcards.

Aside from his, famous Panorama de l'Yser, exhibited in Brussels, Bastien also created a smaller sized Panorama de la Bataille de la Meuse in 1937 which showed an amalgam of scenes from the fighting in Namur and the Citadel of Dinant during August 1914. Part of this panorama, which depicted the massacre of Belgian civilians in Dinant in August 1914, was deliberately destroyed by German authorities during the 1940–44 occupation.
Click on Image to Expand 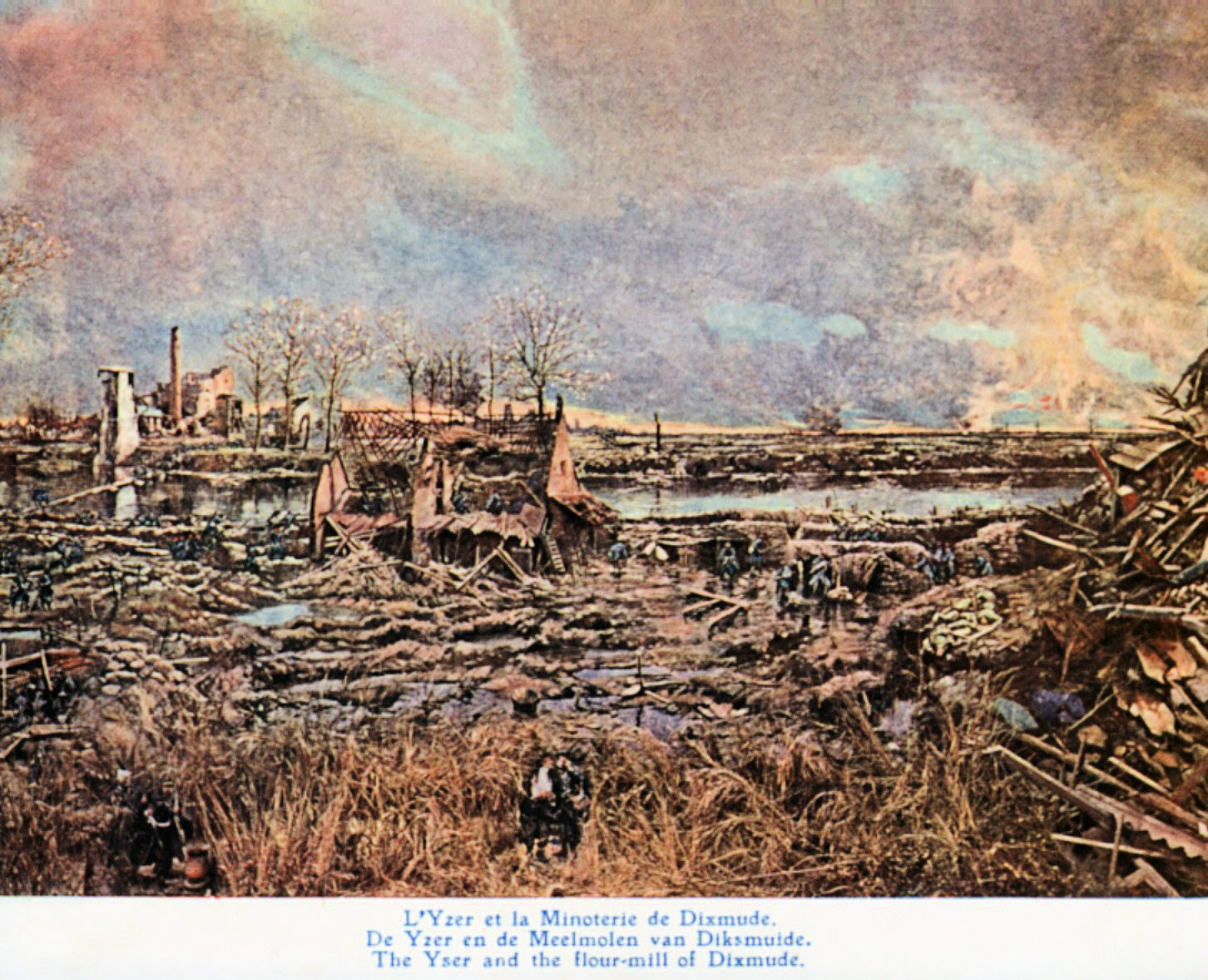 The Panorama de l'Yser was heavily damaged in 1940 during a bombing raid by British aircraft. The museum was closed during the war years and the painting was exposed to all manner of adverse weather conditions. In 1951 the work was moved into the Royal Army Museum in Brussels where a preliminary restoration was undertaken. Afterward it was exhibited in the Army Museum until 1980. Subsequently budgetary constraints and different prevailing artistic tastes have prevented any work being done on the weathered and aged Panorama de l'Yser. the painting has remained in storage, awaiting further restoration and a definitive destination.
Revised: 8 September 2021
Editor's Note:  There are news stories to be found on the Internet that a philanthropist has offered to purchase the panorama for the town of Walcourt, and that plans for restoration and preparing a site are underway.  I have not been able to fully confirm this, however.  MH