What Brought on the February Revolution? — Riots

Here Professor Joshua Sanborn of Lafayette College will explain how the strains of mobilization and defeats on the battlefield led to deep discontent in cities and the borderlands of Russia. Civil disorder, consisting of a nearly continuous series of strikes and riots, ensued and would eventually bring down Nicholas II and his regime. Strikes, soldiers' mutinies, ethnic repression—every imaginable type of riot—would lead to and trigger the February Revolution of 1917.

Despite confident claims of historians ever since, Russian men did not go off to war in a fit of patriotic fervor, or I should say, not all of them did. Throughout Russia, the declaration of war sparked riots, some of them enormous and serious. Officials in the Siberian province of Tomsk anxiously telegraphed the Ministry of Internal Affairs soon after mobilization began in July 1914 (Old Style) that

Reservists are producing disorder almost everywhere. . . in Novonikolaevsk [present-day Novosibirsk] a mob of reservists sacked stores and began to sack the bazaar, the disorders were stopped with the assistance of [army troops]. . . The mobs threw stones at them, one rifleman was wounded with bullets, as a result of  which the troops opened fire. . .

Nor was the disorder limited to Tomsk. In the city of Lugansk, riots began with an attack on liquor stores, and the crowd then proceeded to loot food and clothing stores before breaking windows in private residences "with shouts of 'hurrah!'" In Ekaterinoslav, the riot was sparked not by a run on the liquor store, but by the unfurling of a patriotic flag and an attempt to start a pro-war demonstration by Black Hundreders, at which point reservists set upon the man who had produced the flag while others threw bricks at policemen, touching off a brawl that ended only when police fired into the crowd, killing one and wounding seven. In Ufa province reservists "dispersed the police and destroyed the induction center, thanks to which the work of medical examination and forming units to send to the front had to stop."

When 1917 dawned, then, demonstrations, strikes, and violent uprisings were already fundamental aspects of Russian political life, even in the capital, where the announcement of the call-up of only sons in 1915 had prompted groups of reservists and regular workers to take to the streets, to throw rocks at police, and to clog up major thoroughfares like Nevskii Prospekt with banner-toting demonstrators. As the war dragged on and economic conditions worsened, so too did discontent among workers and reservists build.

On 9 January (22 January ) 1917, the twelfth anniversary of "Bloody Sunday," which had sparked the Revolution of 1905, nearly 150,000 Petrograders went on strike and conducted a protest march in which they demanded an end to the war, complained about rising prices, and pleaded for pay raises. Similar demonstrations took place on the same day all over the empire, from Moscow, to Baku, to Tver, to Tula.

Strike waves and urban demonstrations rolled over urban Russia for the first two months of the year, until finally the rising tide of unrest crested the well-worn banks of autocratic politics. The catalyst on 23 February (8 March ) was economic deprivation, as bread stocks dipped to such low levels that residents were forced to wait for hours in the pre-dawn cold simply to buy a couple of rolls or a small loaf. Frustrated citizens, led by women, took to the streets chanting "bread."

Workers left their factories to join the procession. By 10 o'clock in the morning there were 20,000 of them; by noon, that number had reached 50,000; by nightfall, police estimates figured the crowd to be nearly 100,000. Food stores were broken into, bread stocks were looted, and the tsarist authorities had their last great test to face.

As we all know, they failed that test. Citizens mobilized on the streets, refused orders to disperse, and finally convinced several reserve army units to join the side of the protestors against tsarist authorities. Raising the familiar banners of "Down with the War" and "Down with the Autocracy," they sang the Marseillaise as well and marched proudly down Nevskii Prospekt. This was an uprising that the government could no longer control. Within four days of the huge bread riots, the Duma had formed a "Provisional Committee" to try to restore order where the tsar's officials had failed. Three days after that on 2 March (15 March ), the tsar himself was persuaded to step down by his high command. The February events proved to be the most successful wartime rebellion of them all. 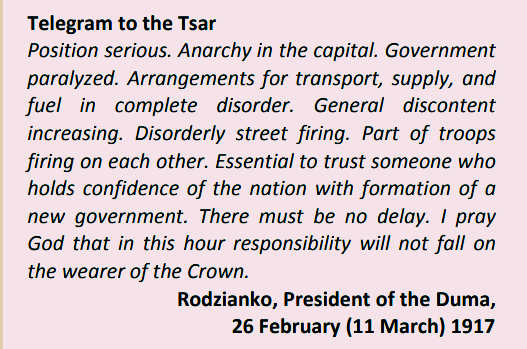 But it was not, as should now be clear, a unique and "spontaneous" outpouring of elemental rage by beaten-down theretofore passive subjects of the tsar. Instead, it was simply the latest and the largest of what had become a common wartime phenomenon: riots against state power. These uprisings varied in their scope and their direction. Most registered some degree of dissatisfaction with the war and with the government. Many were expressed in the new ethnic key that had already become common throughout the realm. All, however, displayed the capacity and willingness for political action, often violent in nature, on the part of the varied peoples of the Romanov Empire.

Source: February 2017 Over  the Top: Magazine of the World War I Centennial