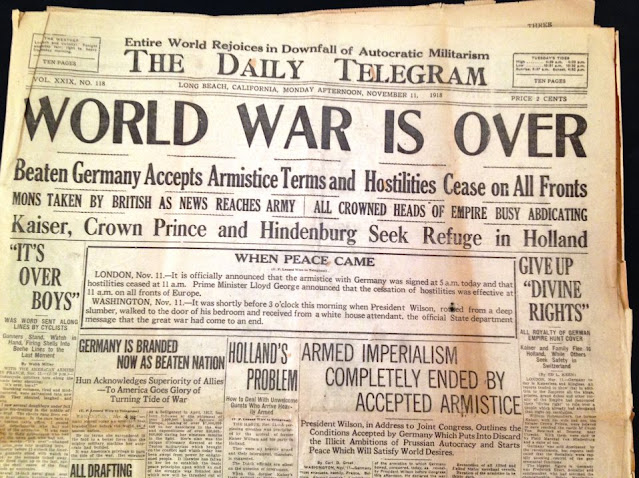 Writing in 1996 from the distance of nearly 80 years, the late Dr. Bullitt Lowry wrote one of the first comprehensive studies of the four different armistices between the Central Powers, the Entente, and the United States that were required to end the Great War:

• Armistice of Mudros for the Ottoman Empire, signed 30 October

Most readers see only that four different signatures were needed, but the issues were nowhere that simple and Dr. Lowry does a fine job of summarizing them in Armistice 1918. The fundamental problem seems to have been that in the late summer and early fall of 1918, no one in power had thought a great deal about how to end the slaughter...except that upstart across the sea, President Woodrow Wilson with his Fourteen Points. These were generally well received in public but derided in private. The resulting diplomatic confusion, rushed conferences, and growing lists of demands and exchanges of notes would have been comical if thousands weren't dying every day as the generals and admirals, politicians and diplomats dithered and squabbled.

In late September 1918, Bulgaria dropped out of the fighting. She was getting no support from Germany and she could no longer defend herself, so she asked for an armistice and got one four days later. This was facilitated by the fact that only one national commander, Louis d'Esprey, and his political leader, Georges Clemenceau, had anything to do with it, though the British did approve of it and Bulgaria was in no position to negotiate anything. Dr. Lowry, appropriately, gives the event itself short shrift.

However, Wilson then declared that the Salonika armistice was to be a model for all the rest...and when the Germans and others started looking for a way out, the real disagreements began. Germany sent her first diplomatic note 3 October 1918, asking Wilson to intervene in seeking an armistice based on the Fourteen Points. But the U.S. had "associated powers" who had been bleeding for three years longer than the U.S. had, and some of those European noses were put diplomatically out of joint. Dr. Lowry's subsequent descriptions—brief but succinct—of the polite chaos that ensued, the hurt political feelings, the demands of the generals and the admirals, the wants of the French for reparations and the relative diplomatic isolation of the poor Belgians are well worth reading.

Each of the German notes, each debate, each of the Fourteen Points, are weighed against each other—the First German Note in three separate chapters—discussing the responses of the Conference of Prime Ministers, the U.S. and the Fourteen Points, and Great Britain. The point keeps coming back, unambiguously, that no Entente state truly knew what their war aims were in the late fall of 1918, and they had not discussed the matter—even internally—at all.

Yet the reader is constantly reminded that the one thing that the Entente wanted was a peace that would last more than a few weeks or even years. What is also clear in the text is that no one in any Entente capital was aware of how bad conditions were in Germany or Austria-Hungary, or even that the Ottomans were ripe for revolution. Germany had 15-year-old boys in the trenches; Austria-Hungary was blowing apart with no one truly in charge in Vienna; and Turkey was ready to shed its Ottoman Empire just to gain some notions of statehood.

However, Dr. Lowry makes it clear that nobody who was going to accept the surrender of the Central Powers knew any of this for certain. What was also clear was that the potential combat power of the United States was either ignored or unappreciated during these discussions. This was demonstrated when Foch asked his fellow generals if the politicians could reach an acceptable armistice if the Entente could carry the war into Germany in the next year: all but General John J. Pershing answered "no." The European armies had no idea that Pershing could bring twice again as many American soldiers to Europe by the spring of 1919, and would dwarf the German, British and French armies in the doing.

But while the sheer size of the 1919 campaign was still a theory—and the influenza was decimating populations worldwide—the politicians still worried about the specter of Bolshevism that could seize Central Europe if they grabbed too many of the German's and Austrian's guns, or demobilized too many soldiers. At the same time, Wilson's Fourteen Points were debated everywhere. While Wilson wanted them to be the terms of a New World Order, they were both too vague and too specific. Moreover, Wilson's man for selling those Fourteen Points was "Colonel" Edwin House, a minister without portfolio who never stood for election nor was vetted by Congress, but who wanted to be the chief delegate at the peace conference. To that end, Dr. Lowry makes it clear, some of House's more Machiavellian machinations intended to make sure Wilson stayed home also backfired.

For those who look to Armistice 1918 for proof that the unconditional surrender policies of the 1939–45 conflict were sound, the reader will be disappointed. Dr. Lowry is succinct in drawing the obvious difference: in 1918 the Entente and the US were looking to stop the slaughter for as long as was reasonable; in 1943 and 1945, the United Nations was looking to dismantle the Italian, German and Japanese regimes altogether. A simple cease-fire would not be enough.

Armistice 1918 is neither the definitive (I don’t like that concept, anyway) nor a comprehensive work of its kind, but it is readable, informative, and an excellent primer on the issue of war-ending, the perils of coalition warfare, and the politics that would beset the Versailles conference that followed. The book is 245 pages long and includes a Table of Contents, Table of Maps (5), Notes, Abbreviations List, Index, and a Select Bibliography. Well worth the read.