After the opening Italian offenses of the war the lines guarding the critical mountain passes were stabilized, trenches, barricades, and  hardened fortifications were begun. One key position on the Austrian/Italian border overlooking an especially important pass, was Mte. Pal Piccolo, 40 miles east of Cortina d'Ampezzo.  A breakthrough here would allow Austro-Hungarian forces to break into the rear of the two main Italian armies attacking along the Isonzo River sector.

That winter, the opposing sides began a large number of actions, surprise attacks, raids and attempts to to disrupt, cause damages, casualties or confusion more than to conquer or defend positions.  Besides the victims of the cold, bad weather, and avalanches there were also casualties by by the continuous sniping by sharpshooters who preyed on those using the paths to the trenches.

At the beginning of spring, the opposing commands were determined  to begin offensive actions.  In March 1916 the snow on the plain of Pal Piccolo was between 3 to 6 meters (10-19 ft.).  In spite of, indeed to make use of the snow, the Austrian Command decided to resolve the situation in one blow by attacking an Italian position at  Mt. Pal Piccolo (at  1859m, 6135 feet), known as “il Trincerone” (big ditch or trench) which blocked the road south. 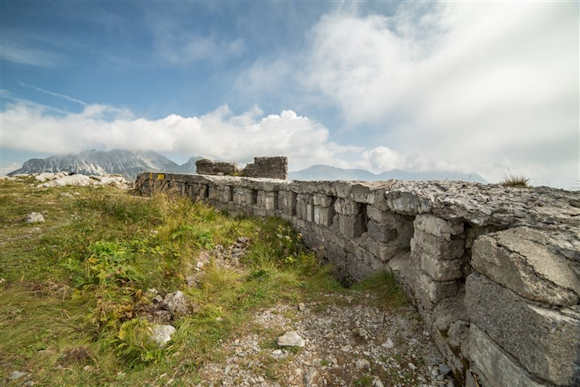 At 2:00 A.M. on 26 March the attack commenced.With a snowstorm under way and soft snow covering the approaches, it was almost impossible for the Austrians to leave their trenches and the attack soon mired down. On the Pal Piccolo, though, tunnels had been dug through the snow and tunnels led toward the Italian lines. The assault platoon of the 8th Jaeger Battalion was finally advancing, when tardy counter orders to pull back arrived. At this point retreating in “no man’s land” would cause a massacre and so  Lt. Kamper, commanding the assault troops ordered the advance to continue.

The 272nd company of the Tagliamento Battalion. which manned the Trincerone line, was caught completely by surprise and retired hastily with great losses.  Immediately, Colonel Poggi commander of the sector reacted, sending reinforcements to the Alpini’s of two Bersglieri companies and any other available units nearby.

That night, during the storm the men struggled to close the breakthrough.  In the morning the storm ceased and in the afternoon the soldiers formed into three columns and counterattacked in the fresh snow.  Because of the minimal results the Italian soldiers were forced to stay over night in the open  in close contact with the enemy.

The night temperature became freezing and this proved lethal for the wounded.  In the morning, with the sudden arrival of the 212th company of the Tagiamento Battalion they had the good fortune of discovering an unmanned path and, in a swoop, fell on the Trincerone.  In a violent melee that followed other Italian units joined in and the Austrians beat a hasty retreat to their original lines. The short delay in orders caused two days of bitter fighting in horrible conditions and more than 2000 dead and many more wounded.

Mte. Pal Piccolo will be one of the most contested points of the Trentino battlefield in the years to come. The lines remained the same and the style of warfare became that of the Western Front, with fixed trenches, snipers, random artillery shelling, etc., except — the soldiers also found themselves on mountaintops with the additional dangers of hypothermia, avalanches, and falling off cliffs. This was the situation for the troops on Mte. Pal Piccolo until the post-Caporetto advance by the Central Powers in October 1917 swept the front line far to the south to the Piave River line. The Italian troops guarding the mountain positions, who were not able to retreat in a timely manner, were left to surrender or simply starve  at their mountain outposts without any chance for resupply.

Today, Mte. Pal Piccolo  is an amazing outdoor war museum, a tribute to the men who served there in the Great War. The photos shown here are from the museum's website.