By Jessica Coulon
Originally Presented in Bicycling.com, 27 May 2019

World War I was unprecedented in its time for its sheer size and deadliness. In part, this was because of new technologies used widely in combat for the first time. Things like modern artillery, powered aircraft, and tanks all signaled a new era of warfare on a massive, far bloodier scale.
But amid a field of advanced technology was one simple, handy, and timeless machine: the bicycle. Rarely the focus of writings and discussions on WWI, bikes were a common sight on all sides of the conflict. In fact, they played a vital role in transporting huge amounts of soldiers and supplies to and from the front lines.
“At the beginning, while it was a war of mobility, bicycles were very important,” said Doran Cart, senior curator at the National WWI Museum and Memorial in Kansas City, Missouri.
Here’s some more of what we learned about bicycles in World War I.
BICYCLES WERE EFFICIENT
Bicycles could move large bodies of troops without some of the problems associated with horses or motor vehicles. Horses needed food, while in the 1910s cars and trucks needed not only fuel but also good roads, trained operators, and frequent maintenance. Bicycles, on the other hand, were human powered and relatively easy to maintain.
Cycling units could travel anywhere between 50 and 100 miles a day. Because they could deploy quickly, many were sent to the front in the war’s early years. French folding bicycles, seen on the postcard above, were especially pragmatic: Troops could ride them on roads when possible, or else carry them over rough terrain. 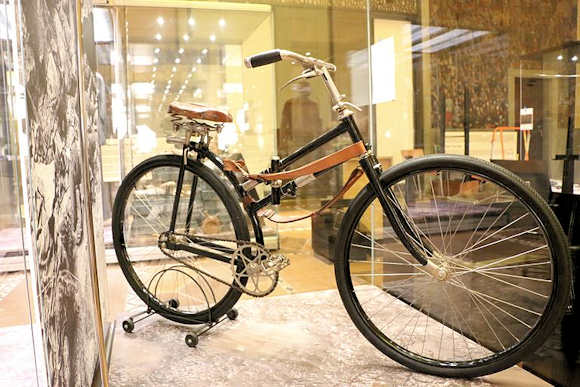 Pictured above is a fully restored “Captain Gérard” folding bicycle, an especially prized exhibit piece at the National WWI Museum and Memorial. “It’s rare,” Cart said. “It went out of fashion when the military stopped using it in WWI.”
This model was designed in 1896 by Henri Gérard, commander of the French bicycle troops, and manufactured by Peugeot. Weighing roughly 30 pounds, it was designed specifically for the French infantry: Gérard added a folding component and straps so soldiers could carry it on their back, and he moved the seat post directly over the rear axle, enabling a soldier to stabilize the bike and fire his weapon while straddling it.
Gérard’s bikes did make a reappearance in World War II, Cart said, enjoying some use among paratroopers.
THERE WERE CYCLING INFANTRY UNITS
Not every soldier had a bike, but some WWI infantry units—and sometimes entire battalions—had only cyclists in their ranks. Professional riders were often recruited to lead these units, which were especially common during the first two years of the war. Seen here is a compagnie cycliste of the French army, a unit that relied on folding bikes. Other countries with cycling units included Britain, Italy, Belgium, Germany, and Russia.
Like guns and uniforms, bicycles were military issued. Among British soldiers, they were in such high demand that for a short time, the Army reverted to using civilian bikes retrofitted for military use.
Members of the cyclist corps were identifiable by the badges on their caps and other insignia. (The U.S. was the only major country engaged in the war that did not designate its cyclists with cap badges.) Most military-issued bicycles were single speeds, though some British models had three gears.
Every country involved in WWI used bicycles at some point. . . German bicycle units faced particular hardships early in the war. Rubber was rationed at the time, and during one shortage German bike manufacturers had to make tires out of wood—or else, soldiers had to ride on their rims. By 1917, rubber tires were only allowed on German bicycles specifically approved for war use.
Although modern cargo bikes hadn’t yet been invented, military bicycles could still transport goods like ammunition, small arms, medical supplies, and food to the front.
AMERICAN BIKES
The U.S. didn’t enter the war until 1917, but when it did the military decided it too would need bicycles. As Cart said, “They realized bicycles could make a difference in certain situations.”
By this point, trench warfare was well underway at the front, meaning bicycles were no longer needed to rapidly move troops. They weren’t particularly safe on open roads, either, but they still played important roles on airbases and relaying messages quickly. The image below shows American servicemen in ground support of an air facility in France. 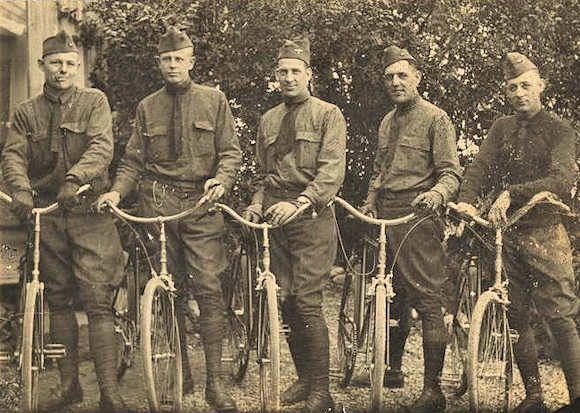 Producing military bikes fell to three American companies: The Westfield Manufacturing Company of Massachusetts, the Great Western Manufacturing Company of Laporte, Indiana, and the Davis Sewing Machine Company of Dayton, Ohio. (The latter switched to making bicycles just for the war.) All three manufacturers put out the same bicycle, known as the “standard military type.” In all, 27,000 American bikes were produced for WWI.
Regardless of country, bicycles in the 1910s were deeply engrained in the public imagination. Unlike many other technologies used in WWI, bicycles were familiar to everyone, including civilians. “It was a tool of war that wasn’t really from the military, so it wasn’t threatening,” Cart said.