In The Great Departure: The United States and World War I, 1914-1920, Daniel M. Smith, professor of history at the University of Colorado, presents a cogent and well-documented account of the political and diplomatic aspects of a turbulent, pattern-changing period of American history. The book has a chronological/thematic organization. That means that the text must, of necessity, skip around in time somewhat, though it is done better here than elsewhere. Readers looking for battle narratives will be disappointed that there are none to be found in this book. This is a somewhat staid and dry foreign policy/political history, not an exciting military/naval one. At the same time, there is nothing here about military politics/diplomacy or Pershing’s struggle over amalgamation or over what kind of troops were dispatched to France. Smith describes the title’s “departure” as a departure of American outlook and policy, a departure that began after the Spanish-American War (1898) and the Philippine War (1899-1902).

By the early 20th century, the concept of “neutrality” had undergone many changes. Though the US declared itself “neutral” on the day Germany invaded Belgium, by April 1917, American neutrality was becoming increasingly perilous. Actual non-participation in the conflict had become hard to find—the Americans had provided everything short of ships and troops to the Entente up to then. Where ties of culture and language were strong between the US and Great Britain, relations of trade and immigration were much broader and more critical by the generation. During the 1914-1917 period, America began to realize that, as an industrial power—and an emerging Great Power—the United States could no longer stand aside and watch the Old World dissolve into chaos. Participation in world affairs was becoming mandatory for a globally-trading nation. The political and diplomatic struggles between competing philosophies of America are among the topics that Smith artfully discusses in this short, thoughtful book 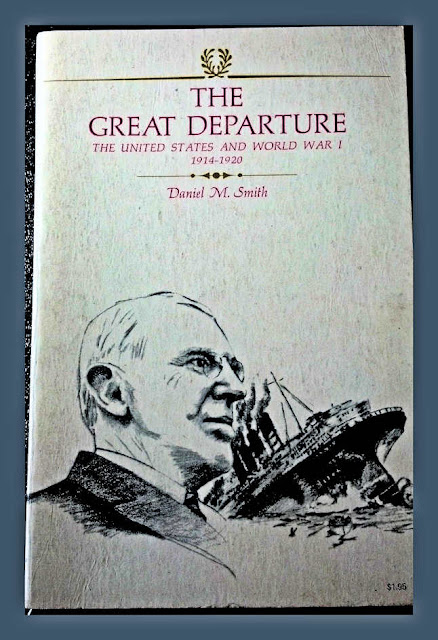 In Chapter 1, The Shock of War, Smith describes American incredulity at an assassination in Sarajevo that could result in a major war. It was also difficult for the “hyphenated Americans” of foreign origin to believe that America could sit back and watch the carnage, resisting the propaganda campaigns from both the Entente and the Triple Alliance that began almost simultaneously with the Battle of the Frontiers in 1914. But trade increased during the war, the American ammunition industry was born, and American financiers lent millions for the Entente to buy American goods. While not going into detail, Smith capsulizes the tensions between official non-belligerence and private war profits well.

The most thoughtful chapter is Chapter 2—American Interests and the World War. It starts with a summary of the American scholarly literature written since 1918 and proceeds to a brief analysis of Wilson’s recognition early on that American neutrality was at best perilous because the US could not allow Germany to be victorious. Wilson and all but one of his top advisors knew that eventually, the US would have to fight if Germany were to come close to victory. Wilson’s first Secretary of State, William Jennings Bryan, did not feel the same way, and Smith draws the contrast between Bryan and his successor, Robert Lansing, starkly. This chapter also details why Bryan left the Wilson administration in 1915, described in Chapter 4.

Chapter 3, Trade and Blockade, describes the myriad changes in warfare and naval technology that diplomacy, international law, and public opinion had yet to assimilate. The spiderweb of neutral shipping, of what was and was not contraband, of where this cargo or that would eventually end up is avoided in Smith’s text, while the diplomatic and commercial maneuvering over these topics is briefly covered. The best that can be said about this chapter is that Smith makes the confusion and Gordian-like knot of blockade politics seem sane compared to his next chapter. My one complaint is that Smith does not even mention the Hoover relief of Belgium and the diplomatic maneuvering it entailed.

America and the U-Boat is Chapter 4, a comprehensive review of American attitudes towards this new form of warfare and the political/diplomatic results. Submarine warfare was as dangerous to the submarine as to their targets if the rules of “cruiser warfare” were followed, as was expected in 1914. Bryan was as outraged by German submarine warfare as the British blockade and instructed his then-subordinate Lansing to write a scathing condemnation of both in response to the Lusitania sinking in 1915. That he was overruled by Wilson—and Lansing’s refusal to write such a thing—foretold Bryan’s eventual exit from the Wilson cabinet. In the meantime, diplomats argued; ships sank; people starved and drowned; the issues went unresolved; naval warfare became that much more brutal; “kill or be killed” was the result. I have long argued that some essential social mores died in the mud and horror of the 1914-18 war. Distinctions between military and civilian was one of those victims, reflected in the advancement and eventual silent acceptance of submarines attacking all targets without warning.

In Chapter 5, Mediation and Belligerency, Smith amplifies his themes of American lack of unanimity and begins his portrait of Wilson as a Presbyterian parson-cum-president. While that characterization is somewhat stark, it is how the European leaders saw him and his attempts at finding a peaceful solution to the increasing savagery of the war. Smith cannot avoid depicting Wilson’s persevering belief in the ultimate power of the populations and their desire for democracy as somewhat child-like.

The Moral Leader of the World, Chapter 6, amplifies the theme of Saint Woodrow of Princeton in Paris. At the same time, Smith refutes the idea that Wilson was unprepared for the complex issues to be addressed in the peace conferences. Smith does acknowledge that Wilson was not prepared for the trenchant tenacity of Georges Clemenceau, or the persuasive arguments of David Lloyd-George, in getting their way on the reparations and peace settlements. Wilson rode on a wave of progressive good feeling (aided by Republican party division) in 1912, and his “he kept us out of the war” slogan in 1916 got him reelected. He was not a career politician like the Europeans accustomed to log-rolling and rough-and-tumble, but a humanist academic who argued facts and morality. Without whipping out the “God only needed Ten Commandments” quip regarding the Fourteen Points, Smith makes this clear.

Chapter 7, A Victory for Collective Security, is somehow mistitled, frankly. It discusses Wilson’s preparations for the peace conference and the politics involved in going to France at all. Wilson should have, Smith claims, left Edward House and Lansing to negotiate in Paris while he managed the Senate’s and the country’s expectations. At the same time, Smith points out that each of Wilson’s Fourteen Points on which Germany relied for a lasting peace treaty was distorted, delayed, or ignored. The Versailles Treaty and the Covenant of the League of Nations were less a real victory for collective security than it was a symbolic one. Treaties and well-meaning organizations couldn’t stop the nightmare that would follow in less than a generation. Yet, Smith hails Versailles and the Covenant as a “victory” nonetheless. Perhaps it is intended to be ironic or as a Cold War homage to the hopes and prayers for the United Nations.

The tangled Chapter 8, The Russian Problem and the Peace Conference casts another shadow from the Cold War. Wilson and the other conferees except Clemenceau were determined to use Germany to bulwark against Bolshevik incursions into Europe. Clemenceau was concerned about the Red Menace but not so concerned that he would leave Germany with an army capable of attacking France again soon. Furthermore, the Bolsheviks were starting a civil war with all its factions, and there was the issue with those armaments that the Allies sold the Tsar that were sitting in Murmansk and Vladivostok. And the Czech Legion was fighting for freedom, which could have been fighting in France. The list goes on. Smith only touches on the most significant, most apparent parts of the Russia Problem, arguably because most were never fully resolved, anyway.

The Struggle For an Enduring Peace, Chapter 9, discusses the last throes of Treaty/Covenant negotiations and Germany’s struggle to sign it. As well-meaning as all the conferees were, there were ethnic issues and minority population issues that Versailles could not solve. Ethnic tensions and perceived and real racism—especially regarding the racial equality provisions that Japan sponsored but had been rejected—threatened any supposed “peace” with more hobnails on the pavement to prove a point, however dubious. Smith’s treatment of the many issues, great and small as they were nailed down or ignored, is as comprehensive as it could get in a small space.

The Defeat of the Treaty, Chapter 10, covers Wilson’s fight over the treaty in the US. Smith’s description of Wilson’s defeat is relatively standard. He also holds that the success of the League depended largely on US participation. I had never fully understood why American membership in the League was/is seen as necessary. Even with American membership, the small pre-1939 US military organization would have been inadequate to stop Italy’s encroachment into Ethiopia, let alone Japan into China. Smith does not tie Wilson’s defeat to his illnesses—which were many—much to his credit. Instead, he connects the failure of the Senate to ratify the Versailles Treaty to Wilson’s lack of genuine political acumen and, again, his enduring faith in everyone always wanting to see things his way.

The Great Departure is a part of a series called “America in Crisis,” published in the mid-1960s and edited by Robert A. Divine, now the George W. Littlefield Professor Emeritus of history at the University of Texas at Austin. While both The Great Departure and the other five books by different authors in the series (providing similar treatments for the Revolution, War of 1812, Civil War, Spanish-American War, and World War II) reflect some Cold War biases, they are well worth digging up for those interested in American political and diplomatic history.