British people who lived or served in India often assimilated Hindi and Urdu words into their daily conversations.  Gradually these were disseminated through the Indian Army and the colonial civilian population, and thanks to the First World War, throughout the British Army and the forces of the rest of the Empire. 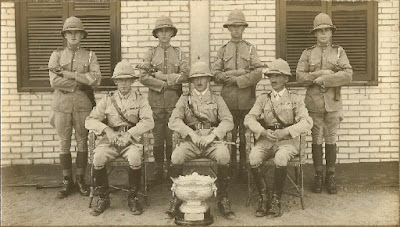 Khaki
The label for this color comes from an Urdu word for dust. The Indian Army championship pistol team above are wearing khaki colored uniforms, first adopted in the 19th century.

Sniper
British officers referred to Germany's highly trained riflemen as "snipers." This word harks back to the Indian Army in the late 18th century when officers would go bird hunting in the hills and the tiny snipe was one of the hardest targets to hit.

Dekko
"Have a dekko" or "take a dekko" uses the Hindi word dekho meaning "look."

Cushy
Cushy was borrowed from the Urdu word kushī by the British in India and used to describe things associated with pleasure, happiness, or ease. British and Empire troops applied it to aspects of their lives in the forces, dubbing an easy job or a comfortable spot as "a cushy number."

Blighty
Evolved from the Urdu word bilāyatī for foreign or European, "Blighty" came to mean England, Britain, or simply "home." Troops of the First World War used "a Blighty one" or "a Blighty" to refer to a wound which would not be fatal but would get a man sent home.