Interesting Symbolism: The U.S. Services of Supply Monument at Tours

The World War I Tours American Monument is located in the city of Tours, France, 146 miles southwest of Paris. The monument commemorates the efforts of the 650,000 men who served during World War I in the Services of Supply (SOS) of the American Expeditionary Forces (AEF) and whose work behind the battle lines made possible the achievements of the American armies in the field. The city of Tours was its headquarters during the war. 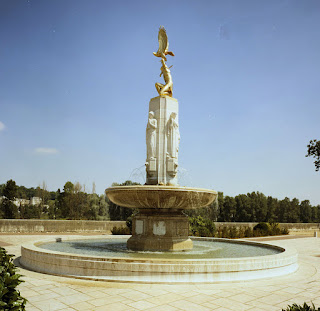 It is located just east of the southern end of Pont Wilson, which crosses the Loire River and consists of a handsome fountain of white stone with a gold gilded statue of an American Indian holding an eagle. Around the column are four reliefs depicting allegorical figures representing the four principal divisions of the SOS  organization—construction, distribution, procurement, administration—and in the lower part eight coats of arms of French cities where important installations of the SOS were located: Tours, Brest, Saint-Nazaire, Le Mans, Is-sur-Tille, Nevers, Neufchateau, and Bordeaux.

Most prominent are the figures atop the structure, but the beautifully executed eagle and Indian, upon reflection, raise some questions for me as to their relevance to what is being commemorated with this memorial. What exactly do they have to do with the mission and accomplishments of the SOS? The eagle, of course, has always been an all-purpose American symbol. What, however, does the human figure represent? Is he, the American people, sending American vitality to France? 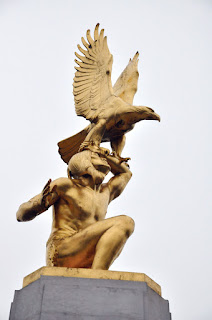 Certainly, American Indians were well represented in the AEF, fighting well wherever they appeared and contributing two of the great traditions of the war: the first code-talkers in U.S. military history,and "the Indian Sgt. York,"  Joseph Oklahombi of St. Etienne (another prospective Medal of Honor candidate IMHO).  I guess where I'm a little stuck, however, is the specific connection to the Services of Supply. The individual clearly does not represent a U.S. soldier (or stevedore or engineer).  Then again, the same question can be raised about the Indian-head emblems adopted by the Lafayette Escadrille, and the 2nd "Indian-head" Division of the AEF. Those figures are not contemporary aviators or infantryman. All I can gather is that the Tours figure is another embodiment of America, adding  a human dimension to the American symbolism of the eagle.

Scholar of the American Indians' service in the Great War, Diane Camurat, seems to think along the same lines.  While questioning the appropriateness of the sculpture, she suggests the eagle and Indian both incarnated wildness, freedom, and physical prowess, thus symbolizing the American participation in the war. Comments welcome.

Images and details from ABMC.gov