How World War I Changed Mourning

On my recent trip to the Western Front, I saw Käthe Kollwitz's "Grieving Parents" (shown below) in person at Vladso German Cemetery in Belgium for the first time. It was, of course, powerfully moving. However, after returning home, I ran across this article that raises the question "Did parents of the war's dead really grieve like this?" 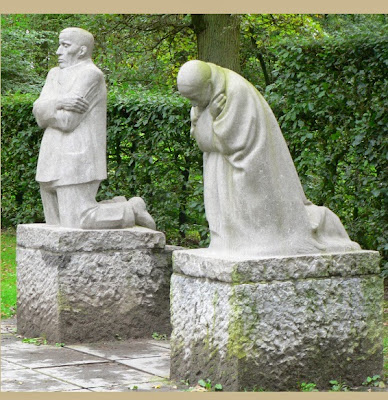 The British anthropologist Geoffrey Gorer, the author of Death, Grief, and Mourning, argues that, at least in Britain, the First World War played a huge role in changing the way people mourned. Communities were so overwhelmed by the sheer number of dead that the practice of ritualized mourning for the individual eroded. Other changes were less obvious but no less important. More people, including women, began working outside the home; in the absence of caretakers, death increasingly took place in the quarantining swaddle of the hospital. The rise of psychoanalysis shifted attention from the communal to the individual experience. In 1917, only two years after Émile Durkheim wrote about mourning as an essential social process, Freud’s “Mourning and Melancholia” defined it as something essentially private and individual, internalizing the work of mourning. Within a few generations, I read, the experience of grief had fundamentally changed. Death and mourning had been largely removed from the public realm. By the 1960s, Gorer could write that many people believed that “sensible, rational men and women can keep their mourning under complete control by strength of will and character, so that it need be given no public expression, and indulged, if at all, in private, as furtively as...masturbation.” Today, our only public mourning takes the form of watching the funerals of celebrities and statesmen. It’s common to mock such grief as false or voyeuristic (“crocodile tears,” one commentator called mourners’ distress at Princess Diana’s funeral), and yet it serves an important social function. It’s a more mediated version, Leader suggests, of a practice that goes all the way back to soldiers in the Iliad mourning with Achilles for the fallen Patroclus.


I found myself nodding in recognition at Gorer’s conclusions. “If mourning is denied outlet, the result will be suffering,” Gorer wrote. “At the moment our society is signally failing to give this support and assistance...The cost of this failure in misery, loneliness, despair and maladaptive behavior is very high.” Maybe it’s not a coincidence that in Western countries with fewer mourning rituals, the bereaved report more physical ailments in the year following a death.

Source:  The Long Goodbye: A Memoir by Meghan O'Rourke