Ten Quotes About the Battle of the Somme

With the 99th anniversary of the famous battle coming in two weeks on 1 July, I've dug through the files and found some of the more memorable things said of the event. I found it hard, though, to find anything matching Kipling's poignant, "A Garden called Gethsemane, in Picardy it was. . .

1. Before the world grew mad, the Somme was a placid stream of Picardy, flowing gently through a broad and winding valley northwards to the English Channel. It watered a country of simple beauty. . . Then came the pestilence.
A.D. Gristwood

2.  Every Englishman has a picture of the Somme in his mind, and I will not try to enlarge it.


3.  The literature of 1 July 1916 is endless. Salutary at first, a proper corrective to the streams of propaganda claptrap about "laughing heroes" and "the Great Adventure" which had previously gushed forth, after a time it developed into a most mischievous mythology.
John Terraine


5.  South of the Ancre was a broad-backed high ground, and on that ground a black vapour of smoke and naked tree trunks or charcoal, an apparition which I found was called Thiepval Wood. The Somme indeed!
Edmund Blunden


6.  During my whole life I have not found a happier hunting ground than in the course of the Somme Battle. In the morning, as soon as I had got up, the first Englishmen arrived, and the last did not disappear until long after sunset.  Boelcke once said that this was the El Dorado of the flying men.
Manfred von Richthofen


7.  It seemed all over, hardly 20 minutes from the start. It was a strong point and still was, even with reinforcements it would be hopeless, with those sodding machine guns still in action. Behind we could see where we started from, in front, the Jerry lines on slightly rising ground. We could see the shape of the Quadrilateral, like a squashed diamond, behind the bank. Judging by the damned chatter when we were going over, a hidden machine gun at every point. Quiet enough now, they had already done all the damage, not giving their position away now, leaving the Jerries in the line to do the odd firing.
Harry Leedham 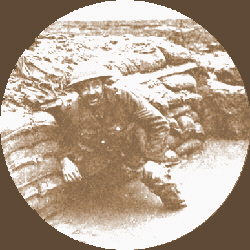 8.  Idealism perished on the Somme.

9.  The tragedy of the Somme battle was that the best soldiers, the stoutest-hearted men were lost; their numbers were replaceable, their spiritual worth never could be.
Unidentified German Soldier

10.  It's the end of the 1916 winter and the conditions are almost unbelievable. We live in a world of Somme mud. We sleep in it, work in it, fight in it, wade in it and many of us die in it. We see it, feel it, eat it and curse it, but we can't escape it, not even by dying.