World War I Views from the Eiffel Tower 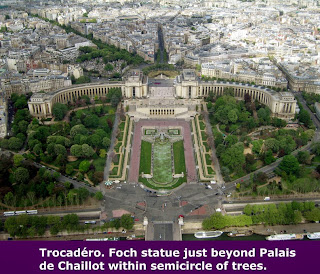 Looking northwest: The Trocadéro, now site of the Palais de Chaillot, was formerly the location of a hill village outside Paris. Overlooking the Seine and the Left Bank, it presents wonderful views of the city and has two notable Great War monuments.

Left: "Monument to the Glory of French Armies", a massive bas-relief by Paul Landkowski (Christ over Rio), was completed in 1956 and depicts the French Army Corps of World War One. Landkowski completed a number of memorials connected with the war, including the tomb of Marshal Foch at Les Invalides (below) and the haunting "Phantoms", the memorial to the Second Battle of the Marne, said to have inspired "Glory. . ."
Right: Equestrian Statue of Marshal Ferdinand Foch (1851s1929) honors the famous general as a marshal of both France and Poland. France sent support for Poland's postwar struggle with the Red Army. The statue was not completed until 1944. It is paired with a facing equestrian statue across the Seine of fellow marshal of France Joseph Joffre, who commanded the French Army at the start of the war. 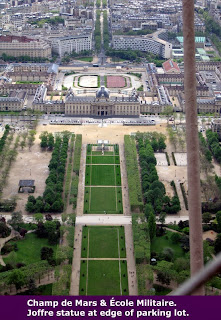 Looking southeast: During the Great War the Eiffel Tower was used as an observation post and wireless transmission and intercept station. There are many tales connecting the tower and the Great War that are hard to confirm: that the tower was "saved" because of it value as a war resource, that its station jammed German radio transmissions during the Battle of the Marne, and that it hosted a detachment of parrots that reputedly had acute hearing able to detect approaching aircraft. During the war, incidentally, Gustav Eiffel dedicated himself to aviation research. 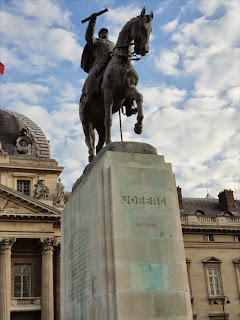 At the École Militaire, the massive military school on the Champs de Mars, is an equestrian statue of Marshal  Josef Joffre (1852–1931), who commanded the French Army in the early years of the war. The statue lists the important battles he commanded including the Marne and Verdun. It directly faces the similar statue of Ferdinand Foch across the River Seine atop the Trocadéro. 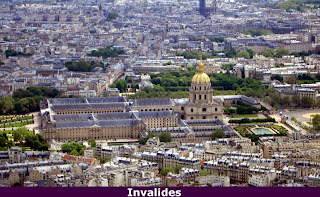 In the 17th century Louis XIV decided to build a "hotel" (the term for a city mansion) to house his disabled and blinded soldiers. It was completed after his death and included a magnificent golden dome over its chapel. In 1842 the chapel was modified to accommodate the Invalides' most famous feature, the tomb of Napoleon Bonaparte. Many aspects of the complex, however, are connected with the First World War. It was on the Esplanade of the Invalides that the legendary "Taxicabs of the Marne" were assembled to transport 4,000 men of the 7th Division to a battlefield northeast of Paris for the critical battle of the 1914 campaign. The buildings house the war museum, Musée de l'Armée, that was opened in 1905, and is today one of the largest military museums in the world. Visiting its First World War pavilion is utterly essential for any student of the events of 1914–1918. Two monuments on the grounds are also notable. Marshal Joseph Gallieni's (1849–1916) statue honors the military governor of the city during the critical opening of the war, and in an alcove off of Napoleon's Tomb lies the crypt bearing the remains of Marshal Ferdinand Foch, Generalissimo of the Allied effort in 1918.