Émilienne Moreau, Heroine of Loos and Later Pursued by the Nazis 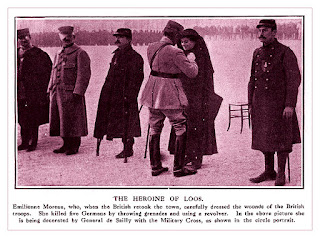 
At 17 years old during the battle of Loos in 1915 Émilienne Moreau was decorated by the British and French for having killed single-handedly several German soldiers who were killing wounded British soldiers. The Germans never really took a liking to civilians who killed their soldiers, even in defense of the helpless, which it arguably was. So when they came back in 1940, she was in real deep trouble, wanted for murder. She (and husband and other family members) joined the Resistance and stayed out of German hands during the war by moving all over the place. After WWII she went into politics and made it to deputy minister. Not bad for a mine worker's daughter in early 20th-century France.

Her story is one of those Great War fait-divers that would make a great movie. It's a wonder no French director has ever done one on her.