Gustaf Hellström was born in Kristianstad, southern Sweden, in 1882 and died in 1953. He was a novelist, journalist, and member of the Swedish Academy. While he is best known for his novel Lacemaker Lekholm Has an Idea (1927; translated into English), he was also a reporter in France between 1911 and 1917 and in America from 1918 to 1923, where he followed the peace process (this resulted in two books, in Swedish). In both France and America Hellström worked for the Swedish daily newspaper Dagens Nyheter (The Daily News). His support of the Allies was unique among Swedish journalists, and Dagens Nyheter was the only Swedish daily newspaper to support the Entente Powers.

The war continued to dominate Hellström’s thinking and writing long after it was over. While his newspaper reports provide detailed observations in Paris and at the front, they do not discuss war as a phenomenon. For Hellström’s views on the war in general we must turn to his Kulturfaktorn. Franska Stämningar under Världskriget (The Culture Factor. France During the War, 1916) and his novel Den Gången (That Time, 1944).  In The Culture Factor, an attack on Carl von Bernhardi’s doctrine that “war is not merely a necessary element in the life of nations, but an indispensable factor of culture, in which a true civilized nation finds the highest expression of strength and vitality” (Germany and the Next War, 6), Hellström states that “nothing is too big, no river of blood too wide or too deep, when it comes to drowning the culture factor. There is no other means than the sword to destroy those who take to the sword themselves” (173).

In the novel That Time, Stellan Petreus, a journalist and Hellström’s alter ego, comes to the conclusion that nothing, not even the love of a mother, can match the sacrifice that soldiers have made in war: “millions and millions have sacrificed their lives, security and freedom” (240) for their nation and their culture. In return, they have become ground in the machine of war: “a massive mill grinding the most valuable grains to a mixture of death, suffering and destruction” (355). This is a process, Petreus reflects, that far from realizing actually destroys the very aims war purports to defend. Hellström’s view of war permeates his novels and reports though it is never actually stated.

Hellström started writing his reports in Senlis, 50 kilometers north of Paris, where he studied the rapidly growing anti-German feeling in France. Anti-Prussian himself but not anti-German, Hellström was initially surprised by the strength of the French animosity. His reports demonstrate, however, that he was soon to forget the distinction between Prussian and German, with the result that he invariably presented the Prussians/Germans as barbaric and cruel. The French, on the other hand, are depicted as patriotic and organized; and contrary to the idea prevailing in Sweden at the time, they were not degenerate but strongly patriotic, ready to fight for their country.

On the outbreak of war Hellström moved to Paris; as a foreigner he was no longer welcome in Senlis and he needed ready access to information from the front. In the first months of the war he met soldiers on leave, interviewed them at railway stations, and visited hospital trains. Hellström showed that France was ready for the Germans and recorded with great pride the grand parade of volunteers at Place des Invalides in September 1914.

His early reports provided new and detailed information about the first few months of the war, showing, for example, that the Germans suffered a major and humiliating defeat at the First Battle of the Marne (5–12 September) – a fact that had not been made clear in other Swedish newspapers. His report “The Living Dead: A Picture of War," based on the battle, features discussions with a non-commissioned officer from a North African infantry regiment and with a captain. Hellström took a back seat, allowing the two to discuss their experiences freely. The non-commissioned officer explained with pride but also sorrow how he was awarded a medal for bravery and how, of the 1200 men of his battalion who marched into battle, only 48 survived; of these, 20 were to die shortly afterward. When the captain left, Hellström asked the non-commissioned officer, “What was the worst part of the Battle?” (78) The answer “the bayonets . . . the swearing . . . the screaming” (78), summed up the situation in a few but well chosen words. When the non-commissioned officer explained that he had contracted tetanus, Hellström ordered him to “tell the story” (78), recognizing its considerable news value. The worst aspect was not the paralysis, explained the soldier, but the smell exuding from his wounded arm – that and hearing a doctor say that nothing could be done for him. Hellström allowed the story to unfold because he knew that it would become an important part of his article.

In May 1915 Hellström was invited to take part in an official and also, at the time, unique visit to the front specially designed for reporters. He seized the chance to get “as close to the Germans as possible, to No Man’s Land, where the ravens fight over unburied dead bodies . . .” He stressed the unexpected nature of the visit, which he realized would be one of the greatest events of his life. In Amiens he was only 12 miles from the German lines. He did not, however, focus on the sounds of battle and the presence of airplanes but on the inhabitants of the town: “they are waiting, unified, display a mixture of patriotism, gravity and wisdom . . . absolute wisdom”. He was excited at the prospect of visiting army headquarters and surprised to find that they were not housed in a castle or a park but a bleak factory, whose chimneys poured out black smoke and whose machines thundered constantly in the background. 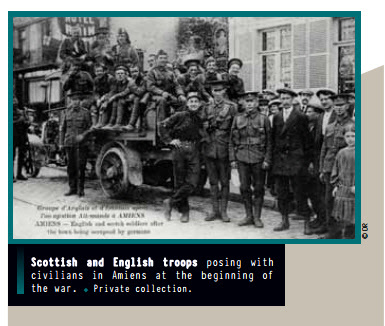 Hellström’s first sight of a battlefield was a shock: the beautiful meadow spread out before him hid, he soon discovered, between 100,000 and 200,000 soldiers crouched in trenches. The shocks continued: the sound of exploding guns was interspersed by birdsong; wild flowers were growing in abundance; and officers’ dugouts contained all kinds of home comforts. Hellström was also to see another side of life at the front, however: ruins, corpses, and the stench of decomposition. His walk through a tunnel reinforced the horror of war as he reflected on what would happen if the German and French tunnelers should meet: there would be “one big grave” filled with bodies ripped apart, screams and curses fit only for an “earthly hell."

Hellström’s reports from Paris and the front gave Swedish readers a new view of the war, one that was not entirely welcome due to the pro-German feeling in the country and one that contradicted much of what was being written in Swedish newspapers in general. Hellström was anxious to preserve his memories of his years in the picturesque village of Senlis, in war-torn Paris and his few days at the front, reproducing them almost word for word in his earlier mentioned prose, in Kulturfaktorn. Franska Stämningar under Världskriget (The Culture Factor. France during the War, 1916) and his novel Den Gången (That Time, 1944). The Gustaf Hellström Association continues to honor the memory of Hellström as a reporter and last year published  1½ Mil Härifrån Står Världens Största Slag: Gustaf Hellström Som Korrespondent i Första Världskrigets Frankrike (9 Miles from Here the World’s Greatest Battle Is Taking Place: Gustaf Hellström as Correspondent in France During World War One), which contains Hellström’s reports on the first two years of the war.

Editor's Postscript
Our contributor, Jane Mattisson Ekstam, will be giving a lecture on Hellström as war reporter at the Swedish national book fair in Gothenburg in September this year.