ANZAC Commemorative Stamps from "Down Under"

The lands "Down Under", of course, are pulling out all stops in commemorating the Gallipoli Campaign of 1915 during its Centennial Year.  One way they are doing so is through issuing commemorative stamps. Both Australia and New Zealand are issuing their own series, and they have also developed a bi-national ANZAC joint issue.  Details are below.  Click on the images of the First Day Covers to see a larger version.  There is a nice illustrated online bulletin that gives philatelic information on the Australian and Joint issues, and information on ordering the associated products like stamp packs and postcards at: http://issuu.com/stamps/docs/bulletin_333l

This five-stamp issue is the second in a five-year series commemorating World War I and focuses on Gallipoli, a campaign that would in time be seen as crucial in shaping Australian national consciousness. The  events represented spanned from 25 April 1915 to 8 January 1916.  The subjects are the 25 April landing, Lance Corporal Albert Jacka, VC,  the August Battle at Lone Pine, "The Man with a Donkey" – John Simpson Kirkpatrick (representing field medicine) and the evacuation from the peninsula. 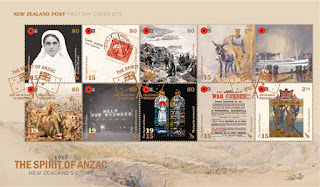 Also, the second set of a five-year program New Zealand's 1915 series features ten stamps of various denominations.   It subjects include yhr 25 April Landing, nurse Evelyn Brooke, hospital ship The Haneno, the action of August at Chunuk Bair, and several traditions assoicated with the war.
See a detailed listing under "issue information" at:
https://stamps.nzpost.co.nz/new-zealand/2015/1915-spirit-anzac#issue-section-496 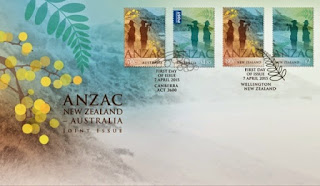 The special connection between New Zealand and Australia is reflected in the design of the stamps and coins of this commemorative issue. The 80c stamp features the iconic Australian golden wattle and incorporates hues that represent Australia’s sunburnt earth and blue skies, while the $2.00 stamp features New Zealand’s silver fern and integrates the lush greens and blues of New Zealand’s fertile landscape. Across both stamps and coins stand two soldier silhouettes from an Anzac memorial service - a catafalque sentry and a bugler sounding the Last Post. A background image of Anzac Cove, Gallipoli extends over both stamps and coins, creating a design reflecting the unity of our Anzac alliance.