The First World War on Cigarette and Trade Cards: An Illustrated and Descriptive History
Reviewed by David Beer 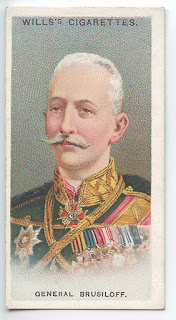 The First World War on Cigarette and Trade Cards: An Illustrated and Descriptive History
by Cyril Mazansky
Schiffer Publishing, Ltd., 2014

You don't have to be a card collector to thoroughly enjoy this splendid publication. Anyone interested in the Great War and open to gaining a fresh perspective on its numerous aspects through the lens of what once was a popular hobby will enjoy Cyril Mazansky's book. I know I did. In fact I found myself spending several enjoyable hours reading through the informative and clearly written text while at the same time admiring the artistic nature of the numerous cars illustrated on almost every page. The fact that the book is produced on fine quality paper stock and that both print and illustrations are of exceptional quality all added to my enjoyment.

The book is divided into two main sections. Section 1 is an informative introduction to the history and nature of card collecting and is enlightening for anyone not familiar with the hobby. These cards originated as simple stiffeners for the paper packets that cigarettes were sold in toward the end of the 19th century. It wasn't long before tobacco companies hit on the idea of not just advertising their product on these cards but of illustrating popular events and notable people, with some brief related information printed on the back. If a certain topic could be extended into a series, so much the better, since the desire to collect the series would encourage smokers and collectors to continue buying that brand. 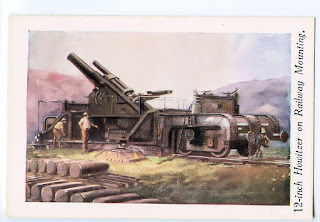 Thus began the hobby of cartophily, which involves the collecting of cards and other illustrative items. The author gives a brief history of cartophily and provides examples of some of the earliest cards. The rest of Section 1 consists of an overview of the war, a timeline, and a brief consideration of what the war meant to individual soldiers and civilians. 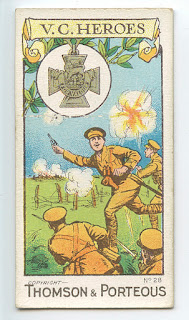 Section II is organized into ten chapters. These illustrate almost every aspect of the war through photographically reproduced British cards mainly from 1914–1918. Chapters on allies, monarchs, political and military leaders all give us a wide view of war-related personalities. Chapter 9 is devoted to cards that depict Victoria Cross winners. A chapter interestingly entitled "Armamentarium" deals with series of cards on military vehicles, tanks, guns, chemical and naval weapons, ships, aircraft, and balloons. Most of the cards are in color.


They are especially impressive when dealing with military uniforms (Chapter 11) and war scenes (Chapter 8). Other chapters are devoted to the home front and war humor and reveal that cigarette cards could be just as propagandistic as posters of the era. In fact, many of these cards reflect the same recruiting and nostalgia themes as wartime posters and postcards. A final chapter considers some German cards of the time that were issued in complete sets. The author's narrative throughout the book is extensive, clear, and to the point. In parallel with the cards it provides a detailed and absorbing popular history of World War One.

You will find many familiar names as you go through this book. Cigarette companies such as Wills, John Player, Morris, the American Tobacco Co., and Ogden's were all reliable producers of cards in their time, as were companies rarely heard of today such as Westminster Tobacco, Ardath Tobacco, and Teofani & Co. Producers of other goods sometimes followed suit, placing cards in their chocolate, tea, or biscuit boxes. The author has provided an appendix with an extensive list of the companies whose cards appear in his book.

It's not surprising that cigarette and trade cards were so popular prior to the war and for some years afterward. As the author points out, in the late 1800s people were far less literate than they are today. Many couldn't afford books or newspapers (which were rarely illustrated anyhow), and posters and illustrated cards provided a kind of visual entertainment not easily found elsewhere. They also provided a source of information and even education for many. In the aggregate these cards soon provided a wealth of knowledge about the war and related matters that many people might never have been exposed to otherwise. Thus, card collecting was popular for several decades, well into the 1940s. It still survives today. Individual and sets of cards are sold and traded on the Internet and several card-collecting organizations exist around the world, including the largest, the Cartophilic Society of Great Britain.

By focusing on World War One in the context of this unique and socially relevant tradition, Cyril Mazansky's admirable and fascinating book has provided a great service to the history and study of both. It is a book well worth having, no matter what your particular aims in studying the war might be. 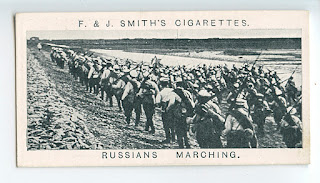