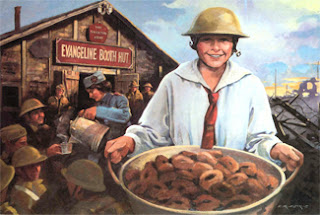 During World War One, Salvation Army workers were in the fighting zones of France. Approximately 250 Salvation Army volunteers were there primarily to give spiritual aid and comfort to the American soldier. They were there to be a link with home and family.

Salvation Army volunteers sought to boost soldiers' morale with food. They started out by baking pies but found that baking pies in the trenches was impractical. The Salvation Army's Ensign Margaret Sheldon and Adjutant Helen Purviance of Indiana cleverly thought of frying doughnuts in soldiers' helmets at first. Later they began frying them on camp stoves, seven at a time. The Salvation Army provided writing supplies, stamps, clothes-mending and home-cooked meals, and of course, doughnuts, to the soldiers on the front lines.

National Doughnut Day commemorates the "doughnut lassies," who provided assistance to American soldiers in France during World War One. 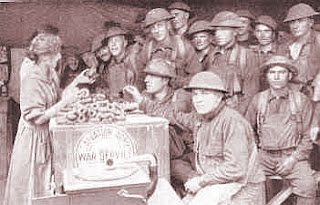