Recommended: A Little Guide to the American Field Service in Paris 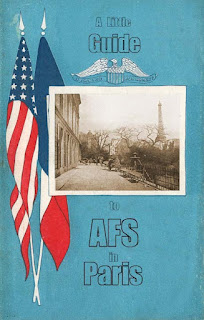 If you are interested in learning about Paris during the Great War this is a terrific little guide from the American Field Service (AFS) and it's now available on line. It has a nice opening essay on the American presence in Paris back to the days of the revolution and then as series of over 40 well-done articles and firsthand accounts  and descriptions about sites to see in the city with wartime, AFS, or general U.S. connections. Here is the selection on the  Lycée Pasteur, which morphed into the American Ambulance Hospital of Paris,

The Neuilly Lycée, whose opening under Principal Fleureau had been stated for 1 October 1914, was transformed from the outset of the 1914–1918 war into an auxiliary military hospital managed by Americans. Until America herself entered the war, the entire personnel of this hospital was comprised of volunteers. This was the case when, one June day in 1917, I was transported in rather poor condition to a ground floor classroom overlooking Rue Perronet. There were a dozen of us there, all badly wounded (since in principal at the American Ambulance, the only people there were those who truly needed to be!) The material organization was perfect, a meticulous cleanliness reigned supreme, with scrubbing commencing at seven in the morning. In each room (a classroom, in principle), there were two nurses and a male attendant – a luxury of personnel and means, to be sure, which were unknown in French military hospitals; so we were spoiled and all the much so as our medical condition required more care. After the hell of the front lines, this was paradise! (M. Lasserre Soixante-Quinzième Anniversaire du Lycée Pasteur, 1989.)

Under the wise leadership of Dr. Dubouchet, three other men, Mr. Laurence Benét, Dr. Edmond Gros, and Mr. A. Wellesley Kipling, have been powerful in promoting the phenomenal growth of the Ambulance Corps. Their titles are, respectively, Chairman of the Transportation Committee, Chief Ambulance Surgeon, and Captain of Ambulances. These gentlemen have worked together unselfishly and indefatigably, and the rapidity with which the manifold difficulties incidental to the construction and organization of automobile ambulance trains have been overcome is due to their untiring efforts. (Eric Fisher Wood. The Notebook of an Attaché, 1915.) 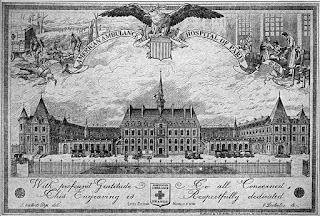 The Transportation Department originated with a small committee during the first week of August 1914, and was organized with a view of providing ambulances for the transportation of patients to and from the proposed Ambulance Hospital. By August 15th eight town and touring cars were available and in constant use, and were rendering most valuable service in connection with the work of installation and equipment. On this date the Manager of the Ford Automobile Company donated ten chassis for the duration of the war, and these were at once fitted with ambulance bodies, designed and, to a large extent constructed, by the volunteer members of the Department. These little cars were at once utilized for the transportation of equipment and supplies, and the personnel worked unremittingly in installing the wards and other departments of the hospital. It was in large measure due to the Transportation Department that the hospital was ready for patients eighteen days after the buildings of the Lycée Pasteur were requisitioned. (Report of Ambulance Committee of 1915. New York, 1915.)

In September 1914, when the line of battle surged close to Paris, a dozen automobiles given by Americans, hastily extemporized into ambulances, and driven by American volunteers, ran back and forth night and day between the western end of the Marne Valley and Paris. During the Autumn and Winter that followed many more cars were given and many more young Americans volunteered, and the battle front having retired from the vicinity of Paris, these sections of motor ambulances were detached from their headquarters at the hospitals at Neuilly and Juilly and became more or less independent units attached to the several French armies, serving the dressing-stations and army hospitals within the Army Zone.

At that time, however, these squads of ambulances, being generally in groups of only about five, were inadequate in size to stand independently and were, therefore, attached by the French Government to other existing services in the rear of the Army Zone. (AFS Fund. Interim Reports, 1917.) 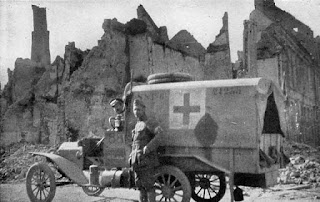 On October 1st, at the request of the British Expeditionary Force, a small detachment of five ambulances was detached for service in the field, and on October 8th left Paris for its new duties. This was the first opportunity of realizing the long cherished plan of a Field Service, which as money and ambulances have become available has been increased and extended until on 31 August 1915, four complete sections, aggregating 91 ambulances and cars were operating in the zone of the armies in addition to 15 ambulances, and 28 other cars attached to the Ambulance Hospital. One hundred and fifty-two officers and men were on duty with the transportation department on the same date. (Report of Ambulance Committee of 1915. New York, 1915.)

View the entire guidebooks at:  http://www.ourstory.info/library/Paris/ParisAFStc.html