100 Years Ago: The Decisive Phase of Verdun Begins

One hundred years ago today, encouraged by their capture of strategically important Fort Vaux on their left flank and their slow but determined advance through the Ravine of Death on their right flank, the Germans reinforced the right bank sector at Verdun and launched a major attack. It was directed against a line defined by Fort Souville, Fleury Village, and the Thiaumont Ouvrage (a substantial field fortification). Anticipating this renewed offensive, French commander, General Robert Nivelle, exhorted his men that morning to hold: Vous ne les laisserrez pas passer! (You shall not let them pass!) was his Order of the Day.

The ensuing two-plus months of fighting would mark the high point of Battle of Verdun. It was concentrated in what is called the Hot Zone, the key features of which are conveniently arrayed in an "H" shape. The H is a little tilted, its top points to the northeast and the bottom toward the southwest, directly to the city of Verdun. The two stems of the letter follow parallel ridges overlooking and dominating a network of ravines. The top stem of the H had three significant defensive positions: Fort Douaumont, which fell on 25 February, Thiaumont Ouvrage, which fell on 23 June, and Froide Terre Ouvrage, which held out for the entire battle. The second major ridge — pointing at the east bank area of city of Verdun holds two of the most strategically important forts on the entire Fortress Zone: Fort Vaux (lost on 7 June), which guarded the French right flank overlooking the German-occupied Woëvre Plain, and Fort Souville, the best observation position on the entire battlefield. 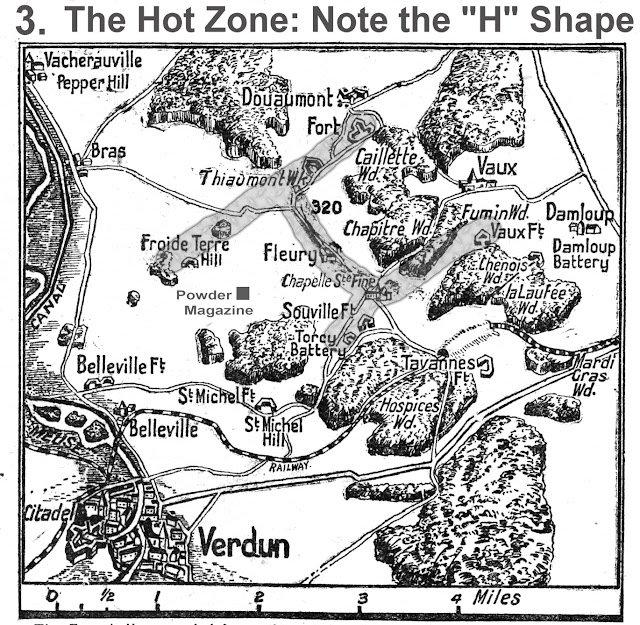 The crossbar — connecting Thiacourt and Fort Souville — is a slightly raised road that in 1916 was the location of the village of Fleury, which had a prewar population of 422. In the ravine behind it were two structures, a powder magazine, and small redoubt, which the German assault troops actually reached at least once. 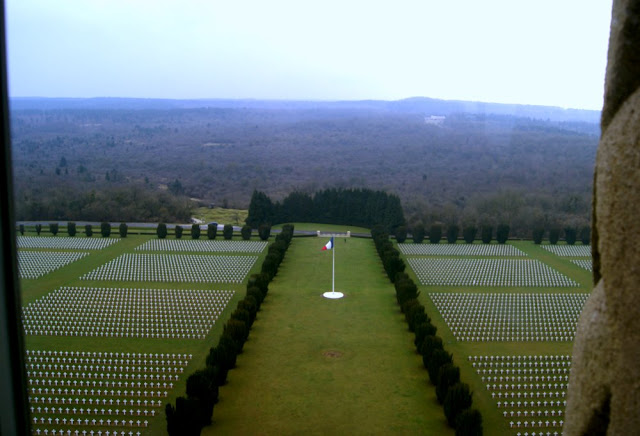 A partial view of the Hot Zone from the Ossuary Tower. The distant hill on the horizon is Fort Souville and the gray mass below it is the Memorial Museum. The memorial is adjacent to the destroyed village of Fleury. The dramatic drop-off behind the memorial is the ravine where the powder magazine is located and where some of the fiercest fighting took place. The ridge each side of Souville is one stem of the H, and along it, out of the picture to the left, is Fort Vaux.  The ossuary sits on the other ridge. Fort Douaumont is to the photographer's left about a mile,  and Thiaumont is immediately to his right, with Froide Terre, two miles farther. 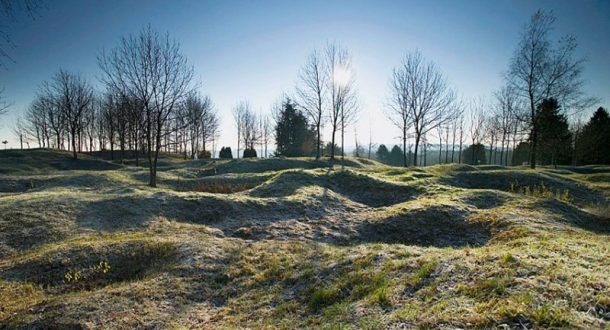 Most of the Hot Zone has been reforested, but there are a few untouched sections where you can see how the battlefield looked at the end of 1916.

Thiaumont Ouvrage fell on 23 June and despite constant French attempts was not regained until 24 October, as would be Fort Douaumont the same day. After Thiaumont fell, Fleury Village and the Ravine behind it leading to the Powder Magazine would become the focus of activity. Fleury would change hands 16 times during the fighting and would finally be secured in mid-August by Moroccan troops. Fort Souville and Froide Terre would never fall. (More on this in later postings.) On 2 September the new German supreme commander, Paul von Hindenburg, ordered a cessation of offensive operations at Verdun.  At the junction of the crossbar of the H and the Souville-Fleury leg, sits a German regimental memorial — a wounded lion — symbolic of the farthest advance of the nation's forces at Verdun, which was nearby. 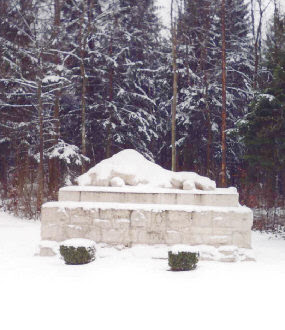