The Ultimate War Poem of Sacrifice and Remembrance 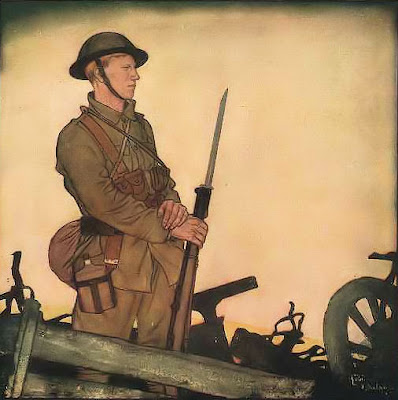 Who shall name them, this numberless army? we  know not their number or name.
But we know from the sign on their foreheads through great tribulation they came;
No calendar blazons their triumph with service of vigil or feast,
And he that was greatest among them is even as he that was least;
They were men in the might of their manhood, or boys in the beauty of youth,
But they held ail as dust in the balance to battling for freedom and truth.

We shall see them no more to our sorrow, they are rapt from the sphere of our pain.
And the sword and the fire and the bullet shall sear not nor slay them again;
Priest and poet, clerk, scholar and craftsman, sea-toilers or sons of the sod —
From earth, air, and ocean up-gathered, they rest in the garden of God.

Their shrines stand in city and highway, whose lamps of remembrance abide
Fed with love from the heart-springs of England, and lit from the torch of her pride;
Upon hill-slope, by hamlet or homestead, they shine through the darkness undimmed,
Morn and eve, 'neath the Christ bowed above them, the glimmering cressets are trimmed
By their angels, who pass unbeholden — so close hangs the curtain between
Veiling heaven ; for the things that we see not are more than the things that are seen.

Now, Lord, for the nation's uplifting — since this is the noblest we know,
In Thy name to the help of the helpless, through death and through darkness to go —
For our country who spared not her children, for mother, love, sister, and wife,
Who endured what is deeper than death-wound, who gave what was dearer than life,
For the pure and the wise and the godlike, who flocked to Thy banner unfurled,
For the sinful — Thy saints in the making — we deemed but the waste of the world,
For the builders of wood, hay and stubble — the foolish, the faithless, the cold.
Whose dross Thou hast purged in the furnace, and touched them, and turned them to gold,
For the fearless of heart, and the fearful who trembled but came at Thy call.
We bless Thee, we thank Thee, we laud Thee, we love Thee, O Father of all!

James Rhoades (1841–1923), a schoolmaster by training, was labelled "a conventional poet who wrote of imperial war in a conservative idiom and a grandiloquent style" in a recent work on World War I poetry. However, if you are looking for an antidote to the more highly praised late war poems of  futility and betrayal "England's Saints" certainly fits the bill.