Eric Bogosian is not an historian or a journalist, the two callings that specialize in creating historical narratives, fact-checked and peer-reviewed. Bogosian is a playwright, director, and actor best known for his work on the New York stage and TV's "Law and Order" franchises, so he does know a thing or two about how to tell a compelling story. More important for this book, however, is the fact that he is Armenian,and that he found something new to relate.


Even America-born Armenian descendants continue to live in the shadow of the calculated destruction of their families that began in 1915 at the hands of their Turkish rulers, and, as anyone who has ever created a related search algorithm on Amazon.com knows, there are hundreds of books about the Armenian Genocide in print. The latest narratives have the advantage of archival and government materials that have become available only in recent decades that substantiate personal memories.

A few Turkish scholars have also weighed in on the side of truth-telling, a serious risk for them under Turkish law. When Bogosian stumbled upon this little-known story about genocide survivors who organized to take revenge on the Turks, he recognized a tale that needed to be told. We have known through books and documentaries about the Jewish agents and lone wolves who sought out Nazi perpetrators after the Holocaust for retribution, but I, for one, had never heard the story of Armenian payback. Bogosian did his due diligence in amassing facts, checking sources, and asking advice of professionals to make sure his work would meet academic standards, and his concentrated course in historiography paid off with this engrossing and profound narrative. 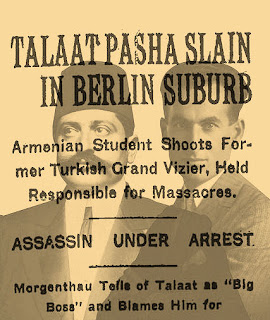 To inform the general reader, the first chapters synopsize the history of the Armenians and their relationship with the Ottoman Empire, and tells the story of how the Young Turk government used the excuse of the Great War to realize their program of eliminating Armenians from within their borders. The information is a bit thick and much more like a standard history book, but the author sets the stage well.

The rest of the book reads like the best kind of crime drama. Rather than repeat all the horrors of systematic massacres, Bogosian concentrates on the stories of the men who survived their own harrowing experiences, so the reader directly connects to the victims. The author uses all the memoirs, letters, and related conversations he could find to provide vivid character studies of the Nemesis agents. When these men realize that the administrative perpetrators of these crimes were not going to be adequately punished, we understand their motivation for revenge. The author takes us to many countries and through many tense moments as the avengers plot and carry out their plan to gain satisfaction, all in the deepest secrecy and requiring personal sacrifice.

Whatever the reader thinks about vigilante justice, the Nemesis story engages us at a level we can all experience through this work. If you root for them to complete their mission, there is a muted sense of satisfaction in the results, but no one comes away unscathed from the aftermath of this historical crime, least of all, the reader. [Warning: gruesome and graphic details may be disturbing to some readers.]