Coming Soon at the Somme: An Up-Close Look

I'm giving a talk at the Sacramento Public Library this Sunday, 26 June 2016, on the Battle of the Somme. (You are all invited, by the way. It's at 3 p.m. at the Central Library.)  Most  likely, almost none of the attendees would have visited the battlefield, and so I have had to come up with a way to show its particular physical characteristics. The geography of the Somme greatly influenced why the battle unfolded as it did.  I've created the slide below help make this point.

The two images (lifted off of Google Maps) are from the center of the British sector, and very close to two of the most famous locations of the battlefield.  In both we are looking in roughly the same direction down what is known as Caterpillar Valley.  Both show the rolling open feel of the Somme and the relative advantage given locally by the area's minimally high ridges and spurs.

The top image shows a sector significant on 1 July 1916.  Just behind the camera is located legendary Devonshire Trench. The front line crosses the road in a near-perpendicular fashion just off to the left of the image. The village visible to the left is Fricourt, which had been held by the German Army since October 1914, and was highly fortified in the ensuing two years.  The Germans had also dug their trenches around Fricourt, running up to the rise just in front of the road.  Consequently, the men of the Devonshire regiment, as they left their trench, were exposed  both to flanking machine gun fire from Fricout on their left and the high ground just ahead. Many of them were mowed down so quickly that afterward their bodies were simply carried back to their starting trench and buried there.  That cemetery is one of the great pilgrimage sites of the Somme battlefield today.  A sign there states: "The Devonshires Held This Trench – The Devonshires Hold It Still.

In the distance, beyond and just to the right of Fricout are visible the treetops of Mametz Wood, and, further right in the far distance, about five miles away, can be seen High Wood.  These are two of the five forests clustered around Caterpillar Valley that would be major obstacles for the British and bastions for the Germans in the later battle.  More on them below. 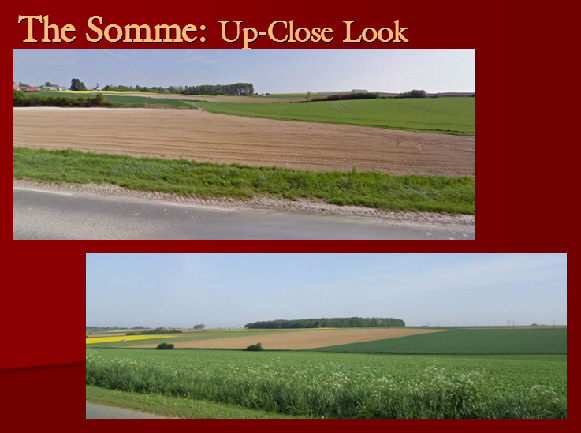 The lower image is a closer view of  High Wood.  Highly valued by the Germans it would be the site of ferocious fighting for two months.  It is said that over 8,000 men of both armies still lie in High Wood today. Each of these five woods around Caterpillar Valley has a similar tale to tell.  The next one over, Delville (i.e. Devil) Wood, when eventually captured by the South African Brigade, had but a single tree left standing after the fighting died down.

A few general points about the Somme battlefields:

The German Army occupied almost all the best positions in the area when they arrived in 1914 and spent the next two years fortifying the zone.

The Allies selected the area for their 1916 offensive because it seemed to present the best opportunity to rupture the enemy lines and break through to the rear. However, rolling – as opposed to flat –country gives a determined defender many advantageous positions to watch and fire on an advancing force.

The Devonshire story is a microcosm of the disastrous First Day on the Somme. Extrapolating the story over the 18-mile British front line shows just how they ended up with 58,000 casualties in a single day. (The French approached things differently the first day in their area.)

On the other hand, the story of the woods gives some insight as to how the Germans nevertheless incredibly managed to match and at times exceed the Allies' casualties for the rest of the battle. They met any partly successful enemy advance with an all-out counterattack. In the woods, with the lack of visibility, any attack was subject to getting chewed up by hidden machine guns, no matter the tactics or the skills of the attackers.

Why was the Somme the bloodiest battle of the war on the Western Front? Because it was the wrong place to fight a major battle given the operational capacities of the armies in 1916.