A Provocative and Amusing Bit of Propaganda

The Hegemony of Germany — What Defeat Would Cost

I forget where I came across this French propaganda map, but it's quite interesting. It's from early in the war, Turkey does not seem to have received any spoils of war, while Italy — still presumed part of the Triple Alliance — has received some of the territory it was yearning for. 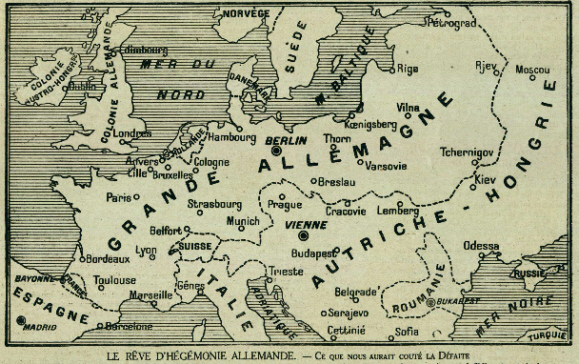 1.  Austria-Hungary gets Ireland and Moscow. Why would they want either of them?

2.  It is assumed that the victorious Central Powers would respect the sovereignty of the neutrals. (I wonder?)

3.  France is left a bit of the Pyrenees to chew on, and the Romanovs  get to keep a re-shaped Crimea.

4. Germany gets to colonize Great Britain and, apparently, fold Finland into Greater Germany

5. I really wish the cartographer had shown the rest of Russia out to Siberia.  Imagine the tottering Dual-Monarchy trying to manage the entire Asian land mass.