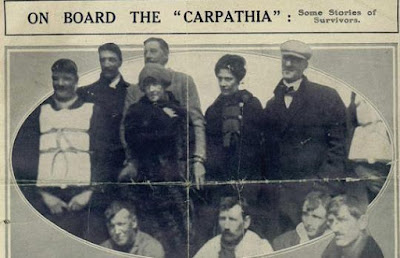 The Titanic's rescue ship RMS Carpathia has some interesting connections to the Great War.

Captain Arthur Rostron of the Carpathia during the Titanic rescue, and later captained the Lusitania. As an officer in the Royal Naval Reserve, when war broke out he was called to service and commanded the troopship Aulania at Gallipoli. He subsequently commanded a number of naval transports.

Sadly, Carpathia was lost in service during the war. On 15 July 1918, Carpathia departed Liverpool in a convoy bound for Boston. On the summer morning of 17 July she was torpedoed, at 9:15, in the Celtic Sea by the German submarine U-55. Of the two torpedoes initially fired at the ship, one hit the port side while the other penetrated the engine room, killing two firemen and three trimmers. As Carpathia began to settle by the head and list to port, Captain William Prothero gave the order to abandon ship. All 57 passengers (36 saloon class and 21 steerage) and 218 surviving crew members boarded the lifeboats as the vessel sank.

U-55 surfaced and fired a third torpedo into the ship and was approaching the lifeboats when the Azalea-class sloop HMS Snowdrop arrived on the scene and drove away the submarine with gunfire before picking up the survivors from Carpathia. America's Last Doughboy, Frank Buckles, had sailed for England on an earlier voyage of the Carpathia.