By mid-1916, major fighting had spread on the Italian Front from the Isonzo River basin to the Trentino and Asiago Plateau. Italy had lost far more men and spent much more of its national treasure than it had ever expected when it entered the war on the side of the Allies a year earlier in anticipation of their early triumph. I thought this would be a good time to look back on just how the young kingdom of Italy found itself embroiled in the war to end all wars, only to find itself disappointed at the postwar peace conference.

In February 1915 the Italians entered into secret negotiations with the Entente about repudiating  their membership in the Triple Alliance with Imperial Germany and Austria-Hungary. They sought to join the Entente in their war against Germany and Austria-Hungary, provided that the Entente promise Italy receive Austrian lands in the peace settlement.  The Russian successes in Austrian Galicia in March, especially the Russian 22 March 1915 capture of the Austrian fortress of Przemsyl convinced the Italian prime minister, Antonio Salandra, that the war against Austria would quickly be over, and he wanted to be with the victors at the coming peace conference. In much the same way as Cavour had insinuated Sardinian troops into the Franco-British coalition during the Crimean War,  [fully supported by the king] Salandra instructed his negotiators to accept almost any reasonable offers of Austrian territory. On 26 April Italy entered into the secret Treaty of London with the three Entente powers of the United Kingdom, France, and Russia.

The treaty obligated the young Italian kingdom to declare war on her former allies in the Triple Alliance, Imperial Germany and Austria-Hungary, within a month.  The lntente promised that Italy could have the southern portion of the Austrian crown Land of Tyrol, the Austrian Adriatic littoral, including the city of Trieste, a large portions of Dalmatia and Carinthia, and several, although not all, of the Adriatic islands. The secrecy with which the treaty had been negotiated violated the first of his Fourteen Points, which promised open covenants openly decided, so Woodrow Wilson vigorously resisted Italian claims at the Versailles Peace Conference, causing the Italian prime minister, Vittorio Emanuele Orlando, to leave the conference in disgust. 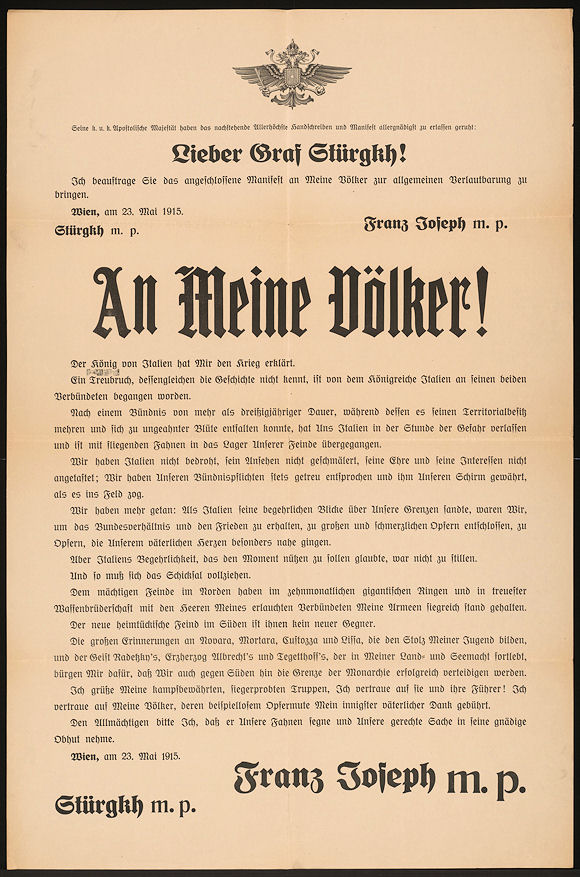 Although Italy didn't declare war on Germany until 27 August 1916, almost a year and a half after her obligation of a month after the April signing of the treaty, she dutifully went to war with Austria-Hungary, a traditional enemy, on 23 May 1915. This caused Franz Joseph to issue his famous proclamation (above) of 26 May 1915 in which he claimed that the "King of Italy has declared war on me," a medieval concept in this very modern war. But Franz Joseph was able to turn his tired eyes away from the unfamiliar maps of the East and to the familiar, from the Italian wars of unification of 1848 and 1866, Italian terrain.