The direct transfusing of human blood between donor and recipient began in the 19th century and by the 1890s had been performed frequently, although with mixed results, largely due to ignorance of blood typing. After the onset of the Great War there were huge numbers of wounded requiring blood, and direct transfusion was hopelessly inadequate to meet the crisis. A Canadian Army doctor, Lawrence B. Robertson, developed a technique whereby he transfused blood by using a syringe, which caught the attention of the Royal Army Medical Corps hierarchy, but it was clear that a much larger-scale method was vitally needed, preferably a method by which donated blood could be stockpiled and administered when required, much like medicines.

The blood bank story began in 1914 when Dr. Albert Hustin, a Belgian, discovered that sodium citrate added to transfusing blood inhibited clotting. A year later, Dr. Richard Lewisohn, a German-born surgeon at New York’s Mt. Sinai Hospital, determined the optimal concentration. This breakthrough meant that many more direct transfusions could be carried out successfully and without physician supervision.  Although the blood cells would still deteriorate if the blood was not used soon after being drawn, this technique still saved many thousands of wounded soldiers in the Great War.

Step two in the story was the discovery by Dr. Richard Weil that blood treated with anti-coagulant would last for a time if refrigerated, and the concept of blood banks became possible, if not yet practical.

Enter now Francis Peyton Rous (1879–1970). He was a pathologist educated at Johns Hopkins (BA 1900, MD 1905) who was lured away from the University of Michigan by the Rockefeller Institute in 1909, where he remained for the rest of his long career, during which he received several awards and honorary degrees, among them the 1966 Nobel Prize for Physiology or Medicine (shared with Charles B. Huggins), the National Medal of Science (1965), and the Lasker Award (1958). Peyton Rous was a member of the National Academy of Sciences, a Foreign Member of the Royal Society, and an editor of the Journal of Experimental Medicine from 1922 to 1970.

In 1911 he found that a sarcoma growing on a chicken could be transmitted to another healthy chicken by a virus (the Rous sarcoma virus, a retrovirus).  His findings were disputed by the experts of that time, especially since he was a young and unknown researcher, and it was a long time before anyone tried to follow up on his work. 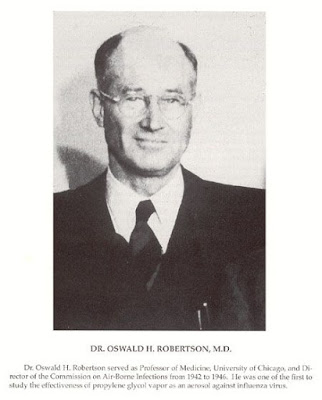 For this discovery, however, as well as his subsequent work in virology, Peyton Rous was eventually awarded his Nobel. The gap of 55 years between his original published results and his award is the longest in the history of the prize in this field. His story is a classic case of an idea ridiculed in its time only to be upheld by later discoveries. Ironically, Peyton Rous’ son-in-law, Dr. Alan L. Hodgkin, a neurological researcher at Cambridge, had shared the Nobel three years earlier.

Peyton Rous made another, unrelated contribution to medicine that in a practical way eclipsed his work in virology: during the Great War he played a crucial role in the development of blood banks.

Step three in the blood bank story occurred in 1915 when Peyton Rous and an assistant, Dr. James R. Turner, sought a more practical way to store whole blood without damaging the red cells.

Experimenting with blood from rabbits, dogs, and sheep, as well as humans, they tested various solutions that would both anti-coagulate the blood and preserve the red blood cells. They arrived at a promising formula: a standard physiological salt solution called Locke's solution, with the addition of Hustin and Lewisohn’s sodium citrate anti-coagulant, plus dextrose as a source of energy for the red cells, a concoction akin to unsolidified Jell-O™. Animal trials at transfusing the preserved blood cells proved successful. This meant that donations of blood could be collected well in advance of the need for transfusions, and blood banks became feasible.

Step four: in 1917 Peyton Rous's young protégé at Rockefeller, Capt. Oswald H. (“Robby’) Robertson DSO, MC (1886–1966), not related to Lawrence Robertson, joined the U.S. Army Medical Corps’ Harvard Unit, which staffed Base Hospital No. 5 at Boulogne.  Peyton Rous convinced him to try transfusing Rous-Turner preserved blood in the battlefield setting. Finding blood donors among camp personnel, he performed many life-saving transfusions. His ice chest stocked with flasks of blood is credited as the world's first blood bank, as well as the first mobile one, and other doctors equipped themselves with Robertson’s gear.

Step five, also in 1917: Lt. Geoffrey L. Keynes (1887–1982), a Royal Army Medical Corps surgeon, the brother of famed economist John Maynard Keynes and the literary executor for his schoolboy pal the war poet Rupert Brooke, developed a glass drip chamber that stored blood and enabled more precise control of the infusion rate and better checking for emboli. This meant that transfusions could happen closer to a battlefield.

However, Oswald Robertson’s blood bank was a boutique operation—his chest held only about 12 units of blood.

Step six was the establishment of the first depot-sized blood bank by the British, preparatory to the Battle of Cambrai in late 1917, using exclusively blood type O.  Although civilian hospitals have always favored refrigeration, the Rous-Turner solution again came into widespread military use during WWII.

Blood banks were an important medical advancement of the Great War era:  the ability to collect blood in advance of need, transport the blood where it was needed, and deliver the blood quickly and easily enabled many thousands of wounded to survive until they could get treatment at a field hospital.