Yesterday, we presented a review of the St. Mihiel Offensive as it was fought in 1918. Even though the subsequent battle, the Meuse-Argonne Offensive was a larger, longer, and bloodier effort, the victory at St. Mihiel was—after the war—treated with equal gravity in the various projects to commemorate the American sacrifices during the war. Possibly, this is because the American commander, John J. Pershing, was the first head of the American Battle Monuments Commission, the nation's caretaker of its cemeteries and major monuments overseas. He—it's clear—gave his two biggest victories equal weighting.

Below are a number of the major American sites in the former salient. The area is also filled with monuments to the French and German relentless war of attrition fought for four years before the Yanks arrived in 1918. One other point—there has not yet been a definitive battle history of the St. Mihiel Offensive published. Hopefully, this will be corrected during the centennial. John Eisenhower told me once that his father had written an excellent analysis of the battle when he was on the staff of the American Battle Monuments Commission, but the manuscript has been lost. General Pershing had ordered it prepared for inclusion in his memoir, My Experiences in the World War (one of the most boring military histories ever written, IMHO), but rejected it. [Ike and Pershing were not mutual admirers; that story is for another day.] 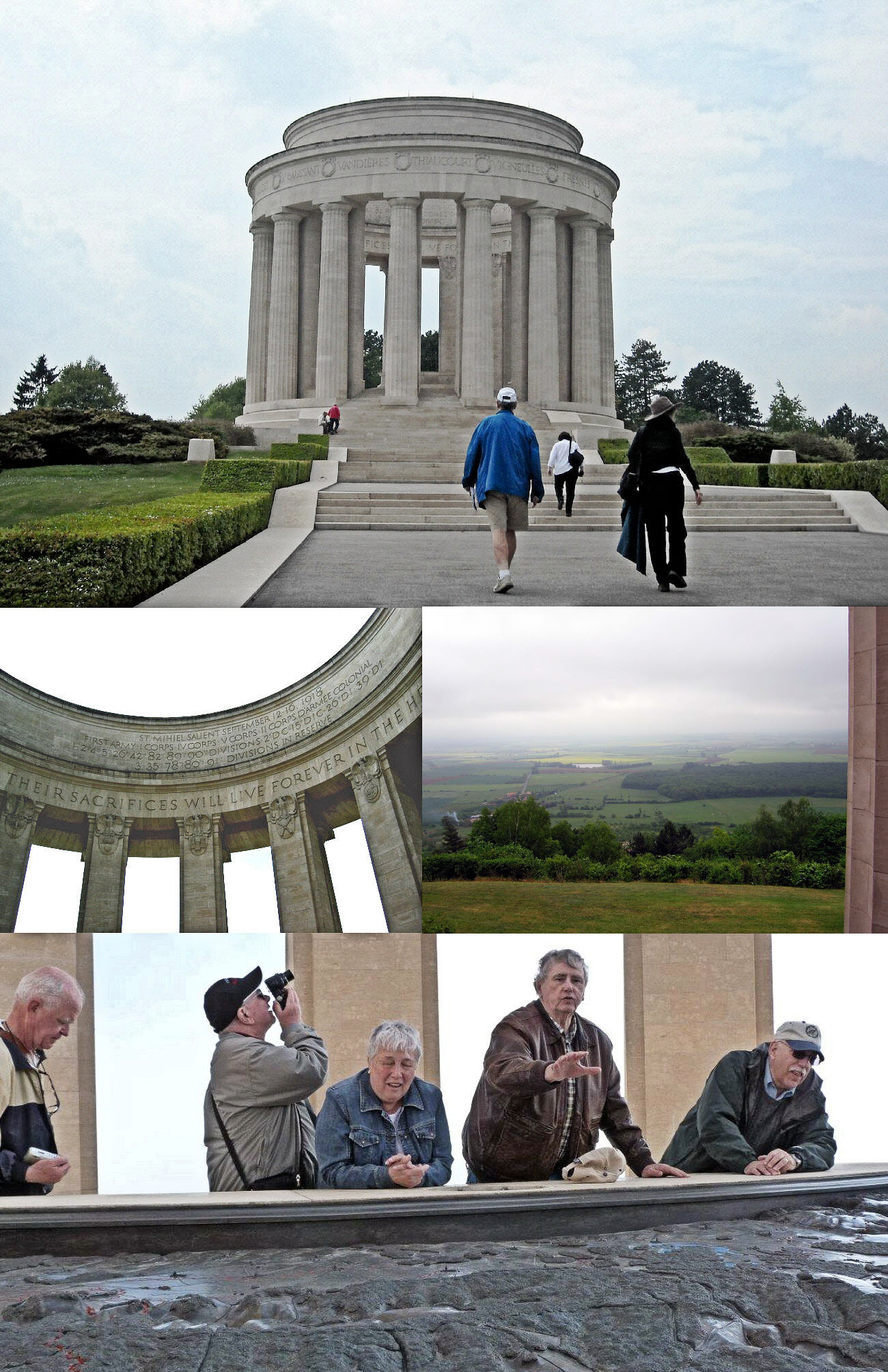 On the hill known as Mont Sec from which the German army had a commanding view of the St. Mihiel Salient is the major American monument to the battles of 1918. (There was a second brief battle just before the Armistice.) The Mont Sec monument is a Greek-style circular colonnade. Show in the photo are: the monument as approached from the parking lot; the inside of the colonnade with the dedication and order of battle inscribed; the outstanding view of the entire battlefield from within the memorial; your editor holding forth with my 2013 group over the bronze relief map of the battlefield (excellent design, but needs cleaning for readability). 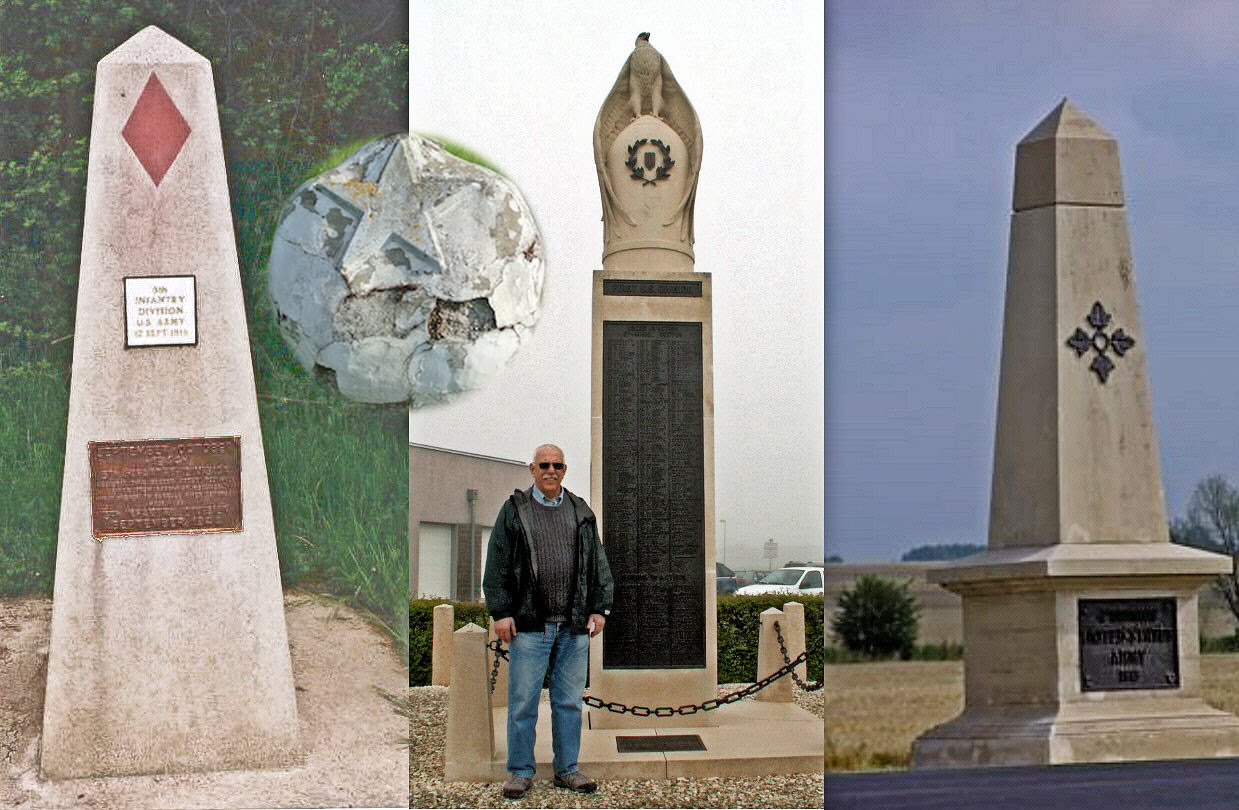 Several of the divisions that fought in the battle have their own monuments. They are all from a series spread over the Western Front by their divisional associations. On the left is the 5th Division Marker at Regnieville; its white WWI plaque is supplemented by a bronze WWII plaque because the division attacked from the very same position in both September 1918 and September 1944. In the middle Tom Bolz is standing at the the 1st Division Monument, said to be placed where the 1st Division, attacking from the south, met up with the 26th "Yankee" Division, attacking from the west, to close the salient. On the right is the 4th Division marker at Manheulles. The 4th was the only American division to attack on the first day of both the St. Mihiel and Meuse-Argonne Offensives. The inset is the sadly neglected 2nd Division marker on the Thiacourt-Jaulny road that indicates the division's farthest advance in the battle. 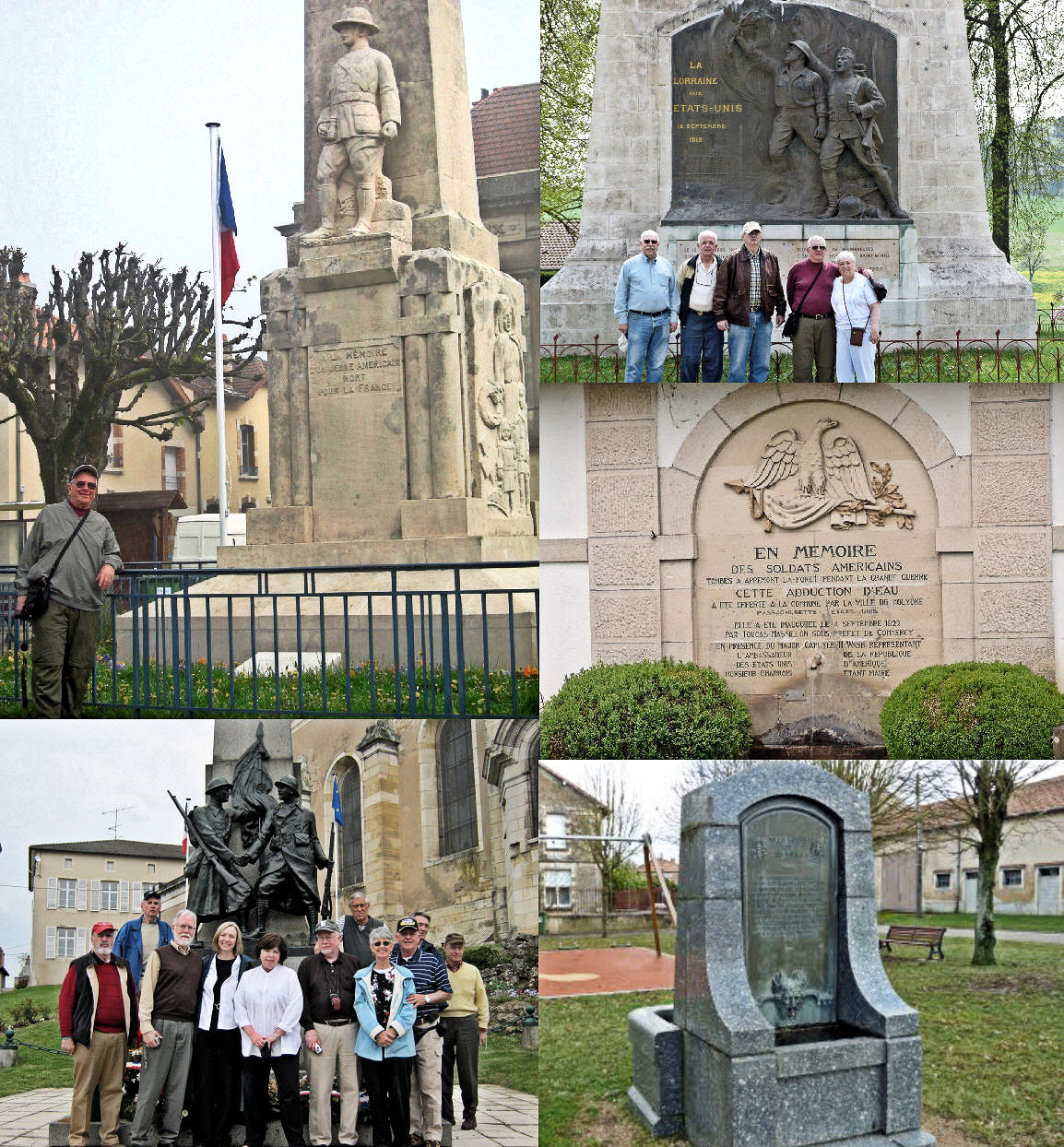 There are a number of impressive monuments scattered around the battlefield that were built by U.S., French, or joint groups. At Vignuelles, Ed Root stands at a privately funded statue to Doughboy Moses Taylor of the 2nd Division who was killed nearby. Some of my 2013 group at the U.S.-Lorraine memorial at Flirey, where the 89th Division jumped off on 12 September. Below them is the fountain at the village of Apremont contributed by the town of Holyoke, Massachusetts, in memory of the Americans who fell nearby. My 2010 group at the French-American friendship monument in Thiaucourt next to the town church. Another fountain, at Seicheprey, was contributed by the state of Connecticut in memory of the fallen of the 102nd Infantry (from that state's National Guard) who were killed when deployed nearby. 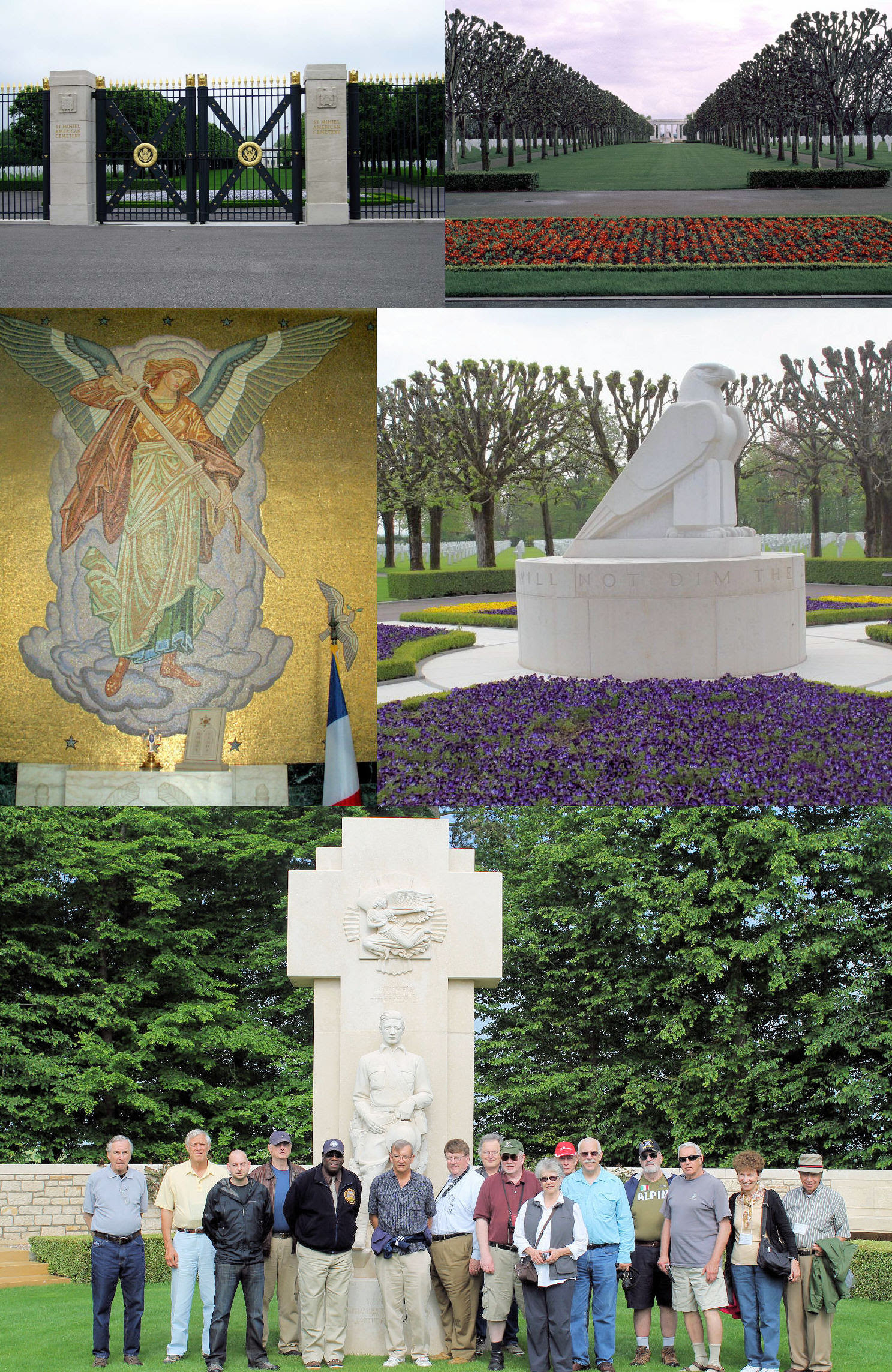 The American St. Mihiel Cemetery, which stands outside of what was a key objective of the September 1918 battle, the road-hub of Thiaucourt. American burials here total 4,153. Also, 284 fallen, who were never found, are honored in its memorial. The town was captured by the 2nd Division and the cemetery grounds by the 89th Division. Shown in the photo are the the entrance—both the front gate and just inside and some of the art works for which the cemetery is notable : a mosaic of the Archangel Michael sheathing his sword; the American eagle sundial; and my 2012 group posing with Superintendent Mike Coonce at a family-sponsored statue—accepted by General Pershing for the cemetery—of Capt. Oliver Cunningham, 78th Division, who is buried in a nearby cemetery plot.