By Pearl James
Published by University of Virginia Press, 2013

The final summer and fall of World War One witnessed a faster rate of death among American soldiers than during any other period of American history. After the war, Americans were preoccupied with death as never before; its sheer physical horror gradually resulted in their talking and thinking about death with an unprecedented intensity. The naked intimacy with the fact of death necessitated a new term, the New Death, which was first used by the popular religious writer Winifred Kirkland in 1918. 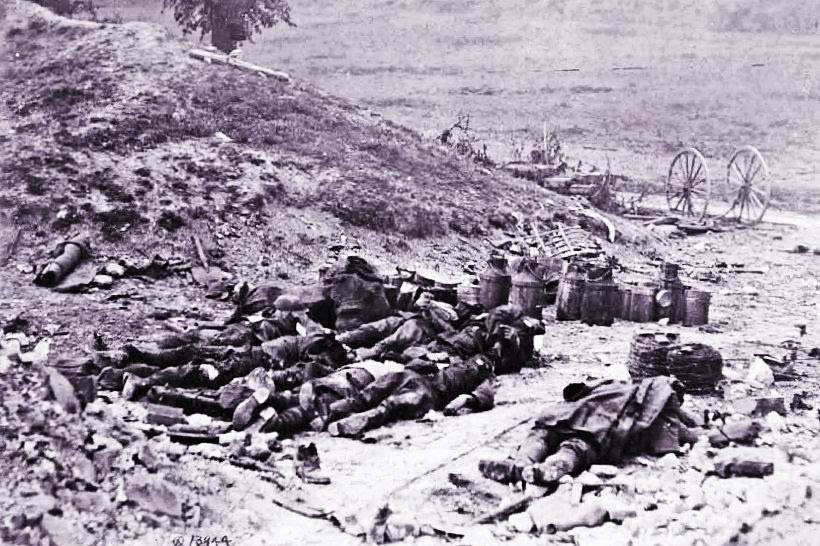 American Dead Awaiting Burial After Battle of Cantigny, May 1918


Each of the countries whose soldiers fought in the war had to decide how best to deal with the men who died, and although the number of Americans killed in action was significantly less than those of most of the other nations, in many ways the problems were more difficult. The precedent of grand Civil War cemeteries, the government's promise to bring home all American soldiers killed on foreign soil, and the great distance to the European battlefields combined to make the task particularly difficult.

Building on Kirkland's The New Death (1918), James's study identifies modern, mechanized, mass death as one of the major preoccupations of American "modernist" writing, disrupting as it did people's ability to prepare for, witness, and ritualize death in the traditional manner of deathbed attendance, funerals, and burials. Soldiers died a long way from home and often instantly. The New Death: American Modernism and World War 1 explores how in the aftermath of World War One novels considered modernist reveal, re-figure, or omit the violent death of young men.

James shows how Willa Cather, F. Scott Fitzgerald, Ernest Hemingway, and William Faulkner responded to the New Death by writing with melancholy about damaged men and mechanized violence; these writers' plots are traumatic — violence constantly recurs, often without apparent effect, and it is often sanitized. New notions of masculinity arose, which limited the means available to male characters to express themselves. Hemingway, Fitzgerald, and Faulkner struggled to depict wounded bodies and psyches in ways that would satisfy their editors' demands for realism and marketability. This is perhaps why, suggests James, that in A Farewell to Arms (1929) and The Great Gatsby (1925), female bodies suffer more elaborately than male ones. Some horrors were "unspeakable" and were omitted. This is very noticeable in Cather's and Hemingway's novels. The New Death: American Modernism and World War 1 explores how injury is "disguised, evoked, sanitized, and regendered in modernist writing" (p. 25). The book discusses in detail some of the taboos about representing male wounds and death. In Hemingway's A Farewell to Arms, for example, James argues that although Frederic Henry is wounded and killed, the primary act of violence in the novel is Catherine's caesarean section; her body is the site of the novel's most damaging, wasteful, and shameful wound.


The conclusion suggests an intriguing connection between American representations of the New Death in modernist literature and another literature of violence, the increasingly popular genre of crime fiction, particularly in the representation of the soldier-turned-gangster. According to James, new crime novels "recall, in both inexact and gruesome ways, the unfinished business of New Death" (p. 206).

While its focus is on literature, New Death. American Modernism and World War 1 is also accessible to general readers who are familiar with the works of Willa Cather, Ernest Hemingway, F. Scott Fitzgerald, and William Faulkner. Written in a refreshingly approachable language and illustrated with numerous examples from these works, James's study offers a new view of how World War One changed the cultural meaning of death and how this meaning continues to be dealt with in popular novels today.

As you will find as you read Pearl James's book, she also introduces her readers to the notion of modernism in a most palatable way. This concept will be explored and explained in greater detail in my coming reviews that address the connection between modernism and World War One.