Luxembourg and the Great War: A Neglected Story

Which country was the first invaded and the last liberated in World War I?

It was the Grand Duchy of Luxembourg. My friend David Heal, a fellow battlefield guide and one-time president of the Western Front Association's chapter in Luxembourg has taken on the mission of telling this forgotten but important aspect of the war's history. He has produced two volumes on this subject. In David's 2010 volume Victims Nonetheless: The Invasion of Luxembourg, 1914, he explains why – for the integrity of the Schlieffen Plan – peaceful Luxembourg needed to be invaded. (It was about railroads.) Now he has produced a second volume, Luxembourgers in the First World War, that covers the personal experiences of the citizens and expatriates of the small nation during the war.

The Shock of Invasion
The war started on 2 August with the invasion of Luxembourg, a neutral country at that time, whose neutrality was guaranteed by all the Powers, including Germany. Obviously, the news astonished Luxembourgers around the world, and in France, no one knew what to do.

Some Were Able to Fight
Almost all the Luxembourgers who fought in the Allied armies were expatriates, despite the allegations made by the Germans, and they were often born outside Luxembourg of Luxembourgian parents, which is completely understandable, especially when the trench lines rendered movement between Luxembourg and France impossible except via Switzerland or Holland, which of itself was not an easy journey. The journey via Switzerland was equally dangerous, and when the Germans installed an electric fence along the Belgium-Holland border it became even more difficult and dangerous. 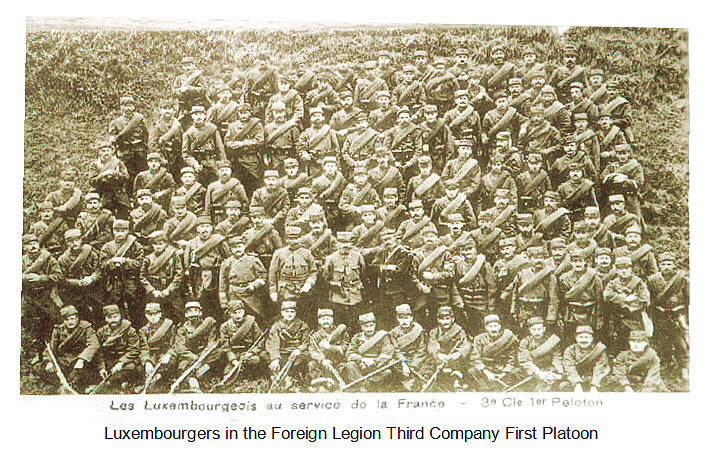 Luxembourgers fought in most of the Allied armies including the American Expeditionary force, but the largest contingent enlisted in France. Most of the Luxembourgers, who rushed to join the French army, entered the Foreign Legion. (However, German families in Luxembourg also sent sons to the German Army and they also addressed in the volume.) The heart of the book consists of the dozens of personal profiles of Luxembourgers who served with distinction in the war. These include such personalities as the six sons and brothers of Theodore Decker of Vannes, former Tour de France champion François Faber, who was killed in action in 1915, and Jacob Bierchem, who served in General Pershing's forces.

David Heal also challenges the official position that "no Luxembourger was shot by the German army during the war" with documented cases to the contrary.