Talbot House: The Sanctuary from War That Lives On


Talbot House or Toc H is in the Belgian town of Poperinghe, west of Ypres. It was the idea of Philip "Tubby" Clayton who wanted to create a place where soldiers on the Western Front could find some peace and quiet when they were away from the trenches. The house was named after Lieutenant Gilbert Talbot, who was killed at Ypres in July 1915. His brother, Neville, was a senior Church of England chaplain who had been tasked with finding chaplains to join battalions at the front line. It was while carrying out this task that he came across "Tubby" Clayton, who was attached to the East Kent and Bedfordshire regiments. Clayton arrived in Poperinghe in late 1915.

It was Clayton’s idea to find a house where soldiers could relax as much as was possible given their circumstances — a place “where friendships could be consecrated, and sad hearts renewed and cheered, a place of light and joy and brotherhood and peace.” Clayton managed to rent out a townhouse in Poperinghe from a wealthy local brewer for 150 francs a month. The house had been damaged by shell fire — the loft in particular needed repairs. The Royal Engineers did this work, and by December 1915 the sanctuary was ready to be opened.

The house was named Talbot House in memory of Lieutenant Gilbert W. L. Talbot, age 23, who was the brother of Reverend Talbot. Gilbert was serving with 7th Battalion, The Rifle Brigade, when he was killed at Hooge Chateau in the Ypres Salient on 30 July 1915. It soon became known by its intials with the "T" pronounced as "Toc," the British Army signalers' code for "T." Rank counted for nothing in Toc H and the house was open to those who were about to go up to the front line as well as to those who had a break from the frontline trenches.  A notice was hung by the front door bearing the message "All rank abandon, ye who enter here.” 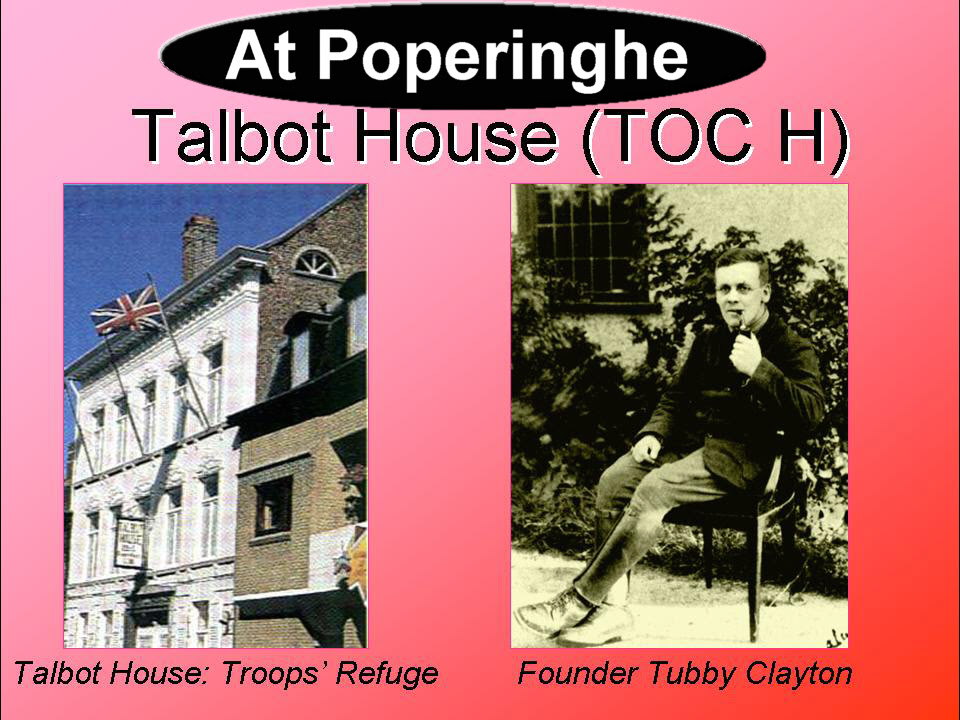 As much as was possible given the proximity to the front lines, Clayton tried to produce a "home-from-home" effect. Harry Patch, "the Last Fighting Tommy," described it as “ ‘the haven’ because that’s exactly what this place was to the men – a place of peace where you could relax, and that’s the only time you could forget the strains of war for a couple of hours.”

When the Great War was over, Monsieur Camerlynck, the hop merchant, returned. However, he was overwhelmed by the number of ex-soldiers who came knocking at the door to see the old house again and put it up for sale. In 1929 Lord Wakefield of Hythe bought the house for £9,200 and donated it to the Talbot House Association, a British-Belgian association that still keeps the site open. There is also an international charitable association know as Toc H inspired by the work of Tubby Clayton.